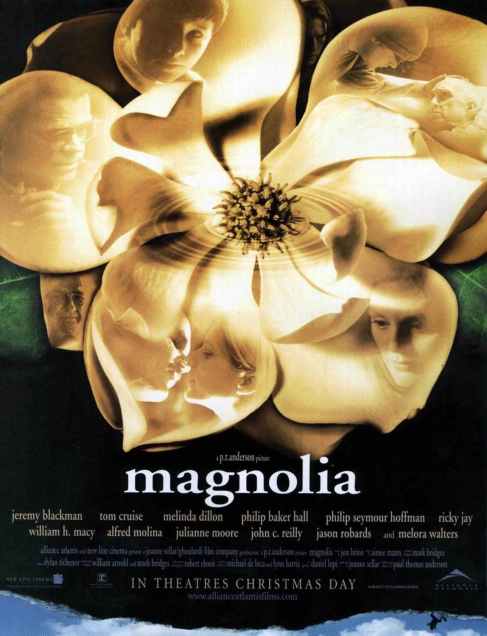 Nothing is more terrific and sensational than a film about love, forgiveness, and meaning. “Magnolia” is spectacle. Julianne Moore, Tom Cruise, William H. Macy, Philip Seymour Hoffman, John C. Reilly, Philip Baker Hall, Melora Walters, and Jason Robards are vast in this structured and mosaic art form of a movie. No better film can be more honest about life and happiness as “Magnolia” is.

“Magnolia” is a film that is three hours and eight minutes in length but is made as if every event is happening in one day. Two parallel characters named Jimmy Gator and Earl Partridge (Hall and Robards) are about to die. Both of the characters are not in contact with their children. Partridge’s son who he seeks to speak is Frank TJ Mackey (Cruise) who is a charismatic misogynist. Gator’s daughter who he seeks to speak to Claudia Wilson Gator (Walters) and she is a drug addict. A nurse cares for Earl and his name is Phil Parma (Hoffman) who does all he can try and reach out to Earl’s son so he can talk with him before his moment is up. A laid back police officer Officer Jim Kurring (Reilly) meets Claudia unexpectedly. They socialize and start connecting and Kurring starts to lead Claudia to a new calm. During all of these events going on, Earl just starts to eat up the guilt of the decisions he has made over the years. Also on the game show that Jimmy Gator runs there is one of the smartest kids on TV named Stanley Spector (played by Jeremy Blackman) he is young and pressured by his abusive father to win everything on the game show. Finally, at the same time during all of these dramatic events, the weather goes back and forth between clear skies and being isolated thunderstorms.

This movie is one that left me to be blown away by. I am into many melodrama films and really get into most of them, but “Magnolia” I did not want to stop watching, I wanted to continue and finish it from beginning to end. The dialogue, the acting, and the connections of the characters defines how life can go with or without forgiveness. Especially with the moments when characters realize the lies they have been told, how they have been betrayed, and above all the consequences of their actions. “Magnolia” makes you look back at your life and realize to yourself that in the end “things fall down. People look up. And when it rains it pours” (The big tagline of the film).

This film was made in 1999, and was Paul Thomas Anderson’s third film. This is by far one of the best films he has ever directed. He wrote the film as well. He did the writing for practically all of his films ranging from “Boogie Nights,” “Punch-Drunk Love,” “Hard Eight,” “There Will Be Blood,” and “The Master.” With Anderson’s creative talent, “Magnolia” is just coercive in the sense that you feel you cannot look away, you must experience the world of these interrelated characters. “Magnolia” has a bunch of touching moments that may seem hard to handle at first, but once it is experienced, people will feel compelled by it.

The technology side of “Magnolia” is done for dramatic effect. Anderson wanted to shoot for sensory overload. He had his editors work to make the film revel in juxtapositions of sound and images that way it can work to help its audience be off-balanced for long periods of time. Therefore, with the characters he wanted them to talk for long periods of time about their feelings. This would be done so by lengthy monologues or a harsh bit of scenery chewing. During those scenes the characters would get close-up shots. Then it would capture the feelings of the characters and really show how they feel about the situation they are in. Feel the connections of family, feel what it is like to seek what is good in this world, and above all, experience “Magnolia.”

Does every big name actor in this drama seek happiness? Best for you to see and find out. Anderson is quite the man for odd endings, but they are never done wrong. When “Magnolia” progresses however, the film becomes more sad, yet touching. Anderson is literally one of my favorite directors of all time. I hope one day he will make another sensational masterpiece.