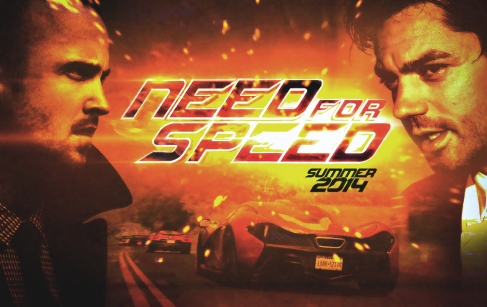 The most brilliant thing with “Need for Speed” is how the action never stops. “Need for Speed” is based off of the classic video games years in the making. “Need for Speed” plots a race car driver that is framed by a rich business associate, and after two years in prison he is ready to avenge the death of his friend that was killed in the race just before he was framed. However it is not just winning being the goal all the time to cause the suspense, it is the fact that the inventors of the vehicles know how to make sure their car is built for damage and reckless driving.

The star of this thrill ride film is Aaron Paul, that plays Toby Marshall, an unsympathetic and ruthless actor that many people may recognize from his hit TV series “Breaking Bad.” The character is all about being a risk-taker, but Paul builds resurrection and being brave seriously where viewers know that when it is race time, that things are going to get ugly.

Dino Brewster (Dominic Cooper) keep himself hidden from his encounter which put Toby in prison for two years. That Dino actually killed the other racer in the race between him and Toby. Toby tries to make his point clear to the authorities numerous times that Dino killed the other driver. Especially with the fact that the other driver is Toby’s best friend. But Dino cares so much about the fame and being the next big racer and will not admit to killing the other driver.

Dino probably just envies Toby’s skill and ability with cars. However, causing someone to get brutally hurt or killed is not the answer. Yet when Toby is released from prison, Dino still holds a grudge on him. But Toby is upset, angry, wants to avenge the death of his friend, not having that much money to pay his bills. Paul is really devoted to make audience believe he is not afraid.

“Need for Speed” is not really a funny film. Toby is a good guy, but his life has turned around after that whole dangerous encounter with the car accident. The film is forward in depicting the motivation and skills of how some people take their anger out on competition; Toby is the ruthless protagonist. However, today’s world is all about competition