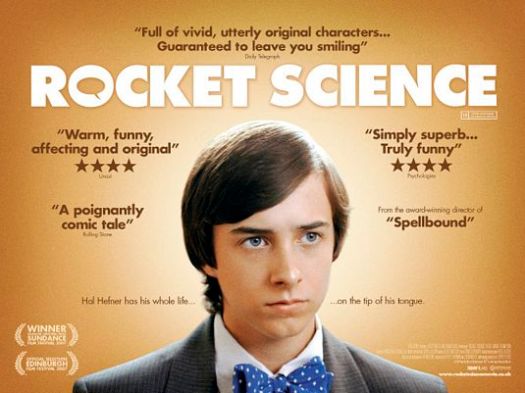 “Rocket Science” is funny, smart, and not your average raunchy teen movie. If you are a fan of shows like “The Office” and “Parks and Recreations” than the humor in “Rocket Science” is something that you will see similarities to. The humor is satirical like both of those shows, because of the fact that writer and director Jeffrey Blitz has been a part of them. He directs “Rocket Science.”

Hal Hefner (Reece Thompson) is as quirky as we expect him to be. He is a solitary boy, has a stuttering issue that he struggles to overcome, and has a hard time accomplishing anything with his own-self. Repeating certain phrases on the school bus, Hefner is someone that really needs to find an activity that interests him.

Hal joins a debate team. The intelligent female debate student, Ginny Ryerson (Anna Kendrick) recruits him to be on the team. Hal sees that he is on the team because Ginny has got the hots for him. Hal though, believes his issue to be more than friends with her is his repetitive stutter.

When the debate competition begins, Hal is not able to shape himself up and look professional. He believes that making himself look ridiculous with accents and singing could be a tool to winning.

If this type of kid was on an actual debate team, debate judges would not put up with his delayed speeches and such. Thompson loses himself into the life of a witty teenager, because Hal is such a strange kid that is in need of some attention. Kendrick’s role is strict and appealing, but only for like the first thirty minutes of the movie. This leaves Thompson’s sense of humor to be the main point of funny in this film.