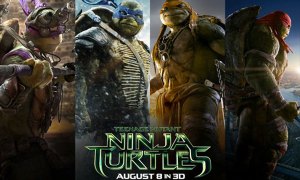 “Teenage Mutant Ninja Turtles” takes place in New York City. The four turtles that roam the streets for justice are Raphael (Alan Ritchson), Michelangelo (Noel Fisher), Leonardo (Peter Ploszek and Johnny Knoxville), and Donatello (Jeremy Howard). Their master and trainer is a rat named Splinter (Danny Woodburn and Tony Shalhoub). April O’Neil is a journalist and becomes friends with the turtle gang and has relation to them (I will not say how she does, you need to watch it and find out yourself). The enemy Shredder (Tohoru Masare), and his evil clan have a plan to take over New York City. The four outcast turtle heroes must do what they do best to save the city from Shredder’s diabolical plan.

This is repetitive of Liebesman, making a movie that is rushed. He could have made the film more realistic, and less childish, including the quirky dialogue that is spoken throughout the movie. But I guess its target audience being teenagers is why it’s a clean and non-offensive flick. The only thrilling moment is the climax of buildings falling down. You know New York is a big city, you probably know the superhero “Spiderman” well, and what happens with buildings in New York in a superhero movie? They chatter.

This is one of the worst films of the year, and a poor choice on Liebesman’s behalf. If he cranked it up with much more story development and more attention-grabbing effects, “Teenage Mutant Ninja Turtles” may not be that foolish. It is as bad as “Battle LA” and as wacky as “Wrath of the Titans” but Liebesman is not patient with his directing. Let us hope he will make a fantastic flick in the near future.