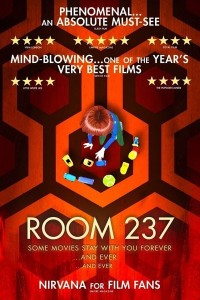 This is a thought-provoking documentary that is structured and honest about one of the greatest directors of our time, Stanley Kubrick. Room 237 is engrossing, original, and twisted. The film will make fans want to take a closer look at Kubrick’s The Shining (1980) to see all of the technical elements Kubrick utilized in the film to make it so attention-grabbing. This documentary’s director is Rodney Ascher. Ascher has directed a few short films. Room 237 is his breakout documentary created on a very low budget, but that went on to win at the Sundance Film Festival in 2012. It is not just the film’s subject matter that is enticing, but its tagline that reads, “Some movies stay with you forever…and ever…and ever,” fans will not help but wonder what kind of adventure they are in for with Room 237.

The film stars many unrecognized film historians, writers, directors, and producers who all explore the creative world of The Shining. They deeply examine The Shining and the mind and work of Kubrick. With many of these narrators who have viewed The Shining numerous times, the plot of the documentary involves them recognizing twists, and puzzles that are dazzling and spectacle. The clues that these narrators find behind The Shining hold viewers attention. Their unique and insightful realizations are unexpected, yet captivating.

Kubrick believed in playing with his audiences in The Shining. Therefore, he had unusual clues that can be recognized throughout the film. He did this to make viewers be curious and to challenge their minds. Examples of clues in Room 237 are a TV without a cord, luggage that is the size of a car, and a chair being somewhere at one moment and then later that chair vanishes. Room 237 elaborates on this aspect of Kubrick’s style as the documentary freezes at various moments with arrows pointing at objects, so viewers can have an understanding of what is trying to be explained in regards to Kubrick’s directing techniques.

Another aspect that was attention-grabbing, but off topic was the film’s connection to the Holocaust. In The Shining, the boy Danny wears a baseball shirt with Number 42, and the father in the movie has an Adler German Typewriter and apparently that leads to the Holocaust as quoted in the movie, “If you put number 42 and a German Typewriter together, you get the Holocaust.” I feel that once this quote was stated, the documentary should have continued, but instead it went into talking about the history of the Holocaust for almost ten minutes. Kubrick’s film, The Shining, is the purpose of this documentary, not going off topic with historical facts that do not relate to Kubrick or his work at all.

In Room 237, I learned that Kubrick used puzzles in important scenes to create suspense. He used calumet cans and placed them on shelves behind characters in The Shining. Although not in frequent scenes, but in scenes where there were two people talking and when it’s a moment of truth. Kubrick wanted that object as a clue to his viewers that they are in for something suspenseful to happen. Room 237 does a good job elaborating when we see the calumet cans and the specific moments of action they are in. This particular technique is quite fascinating and engrossing.

Finally, the most critical reason why Room 237 is an important documentary is because they explain the research Kubrick did before directing The Shining. Kubrick always did a tremendous amount of research on how to immerse viewers and get them to feel like they are in a dream. In The Shining, he does this by incorporating past events before the present events. To elaborate on this, it starts with a murder that has happened years before the Torrance family becomes the caretakers for the Overlook Hotel. Not many of the crimes that have happened in the past are explained, but the minds of the characters get twisted based on those current events that cause them to demented and evil. Kubrick made the past events play a negative role on the lives of the characters in The Shining in order for his audiences to feel immersed into the wondrous and odd world of his directing style.

Room 237 is a masterpiece documentary. It is a documentary that will make viewers appreciate what makes a movie captivating and how much dedication is involved in making a movie that brilliant. The documentary may also make you wonder about other film directors that have styles of directing that they are intrigued by or attached to. Overall, this documentary is worth your time if you want something that will leave you thinking.