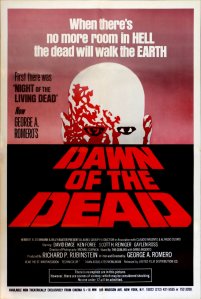 The setting of Dawn of the Dead is in a shopping mall where survivors are sheltering themselves. The mall has some zombies scattered in a variety of different places of the mall, but it is only in the commons. This setting proves a suspenseful purpose because it leaves viewers to be curious of how long their shelter may last. The survivors keep shelter in the storage spaces of the mall because the zombies have no idea that the survivors are there. The mall is also proven beneficial because when supplies are needed, the survivors can get their hands on what is necessary. When they do this, their lives can be on the line, but they create a structure for distraction towards the zombies. They do this so they can get what they need without getting infected or killed. What adds to the suspense is that eventually somebody will end up getting infected because the population of zombies increases day by day.

Shaun of the Dead, however, the setting made no sense which viewers know that this was not a serious zombie movie. The film took place in London, geared on two friends who are lazy and drink consistently. All of a sudden, they stumble upon a zombie apocalypse with no idea how to survive. Therefore, they do ridiculous things for survival. The weapons they use are not really useful and their priorities are way off with safety being the last priority. In Dawn of the Dead, their shelter was a lot more secure. On the other hand, the shelter in Shaun of the Dead was quirky and not useful. They stay in a small pub to wade out the apocalypse and they board up the windows. Given that Shaun of the Dead was intended to be a comedy, there is no suspense for the viewers.

Both these films have a social message that grabs the attention of its viewers. However, both the messages are opposite from each other. The message from Dawn of the Dead is that surveil is the number one priority. This message is portrayed by the survivors as the film contains numerous moments of dramatic conversations on how to survive. A scene that describes this is when the survivors are trying to come to an agreement to who will go gather supplies from the mall. The reason why no one can come to an agreement at first is because of how the mall is swarming with zombies. Therefore, a fatality can happen instantly. The message from Shaun of the Dead is that safety is the last priority. Viewers realize this instantly as the movie already opens to be quirky. The main character walks to his usual convenient store to grab his caffeinated beverage. As he strolls to the store hung over, he does not even realize that the people around him are zombies. He realizes this like ten minutes later into the movie. With complete honesty, the characters do not even consider smart strategies for survival. They use useless weapons, want drinking to be a priority, and instead of finding safety, they want drinking to be involved.

Overall, the era of zombie flicks has been going back and forth. The goal of zombie entertainment is not just to leave viewers scared. Instead, the gruesome violence in Shaun of the Dead is used to make quirky and laughable. This is a continuing factor in this era of entertainment. I believe this is an element that will be continued since the laughing moments of zombies leaves a fan base for viewers.