Jason Segel and Me! 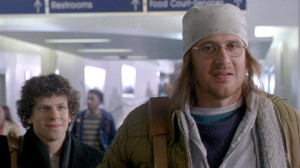 Even though “The End of the Tour” is receiving positive buzz right now, I was lucky to get to see it back in April at the Roger Ebert Film Festival in Champaign, Illinois. I also met the lead Jason Segel. As I walked into this movie not knowing very much about it, I ended up being enthralled by the film’s meaning, acting, and its story. Director James Ponsoldt creates a true story that is destined to be a cult classic. In the discussion after the movie at the festival, I was moved by the discussion between Ponsoldt and Segel. However, I am now going to explain the movie a bit and why it stands out as a masterpiece.

A Journalist named David Lipsky (Jesse Eisenberg) is set to do a five-day interview with David Foster Wallace (Segel). The goal for Lipsky is to get an idea of Wallace’s background, his hobbies, and what he does in his daily life. This is all right after Wallace’s 1996 publication of his novel Infinite Jest. However, as the days go by, Lipsky and Wallace become quite close as Lipsky conducts a series of interview questions. They have their awkward, yet fun moments, they are connecting, and for Lipsky, he feels that Wallace is like a brother to him. The relationship between the two is touching where viewers will feel enlightened at the end of the movie.

There are times of frustration between the two. Some of the information that Wallace shares with Lipsky is quite open about his life. I will not give details of what that sacred information is. That is something that you will have to find out if you watch “The End of the Tour.” Overall though, it is about coming out of your shell. That is something that Wallace and Lipsky find themselves doing at times of conversations with each other. When they do that, they feel they are creating a bond that will change their lives forever. The different tones of their frustrations can be something that makes better in the end.

“The End of The Tour” is essentially about friendship. Lipsky may just be a journalist that wants to write a story to build his ego, but he has a lot of heart. He demonstrates having a heavy heart in the scenes where he proves to Wallace that he is a reasonable and honest guy. Wallace may be a hippy, lazy, but auteur writer, but has a very creative mind and has a lot of positive personality for Lipsky to absorb.

Lipsky will have a brilliant story on spending his time with Wallace. His story will be successful. However, to find out how successful it is, that is something for you to find out. “The End of the Tour” simply cannot be missed. I think it is one of Ponsoldt’s best. The best since his previous film “The Spectacular Now” (2013).