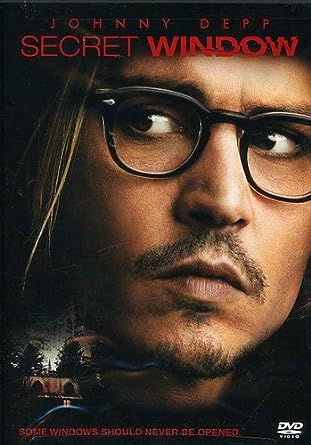 I came across watching “Secret Window” recently after about six years of not watching it. I went back and read reviews, it had some good and some bad, and to me the film is not, amazing or horrible, it is average but needs improvement. “Secret Window” is a film that leaves viewers to have multiple questions as the movie goes on. The film has some terror, tension, and disturbing scenarios that creates a pattern of an unexplained puzzle and that does not make sense to its viewers. The film stars Johnny Depp (as Mort), John Turturro (as John), Maria Bello (as Amy), Timothy Hutton (as Ted), and Charles S. Dutton (as). These characters play a role in this catastrophe that is in the hands of one man whose life may be at risk due to plagiarism.

The main character is Mort. Mort is someone that has a successful career as a writer, however is going through a divorce. He lives in a cabin in a forest around the out skirts of New York. He is introverted and does not have much of a social life. That is until one day, another writer (John) knocks on his door and starts to interrogate him claiming that Mort had stolen one of his stories. Mort believes that it is all a lie and is false and he starts collecting facts and evidence to prove his belief that John is making the scenario up and is crazy. That may be the truth, but harrowing events starts to impact Mort’s life the more he denies what John claims. Mort finds himself having to go back to talking with his soon-to-be ex wife Amy and her boyfriend Ted. This is challenging for Mort because he has memories of events that he believes to be the cause of him and Amy separating. He also hires a detective (Ken), and that detective is very costly and is not solving many of the answers for Mort. Throughout the film, Mort tries to piece together if John is right or wrong.

The film is attention-grabbing, but in a sense, cheesy. A couple of conflict scenarios in the film do not make sense. I feel the director, David Koepp, tries to have his viewers gear on one character when it comes around being curious to who is responsible for damages in the movie. A pet is killed early in the film, a house is burned down by someone, and people are found dead in a car in a forest. Viewers wonder if John is responsible for them, however there is a twist to those shady events.

When I have watched this movie, I can tell the writing was done to make Mort to be a self-absorbed, and opinionated person. That is because whenever anyone in his life tries to have him to terms with himself, he acts like he is above everyone else, and does not admit at all to his negative attitudes or sarcasm. He is someone that will believe his problems will blow over him, and not be a big deal, but they do turn to be big deals slowly. For Depp’s character, he is nerdy, angry, and clueless towards how to deal with his problems. He puts off important priorities just because he wants to believe he is right.

For Turturro’s character, he is someone that tries to create tension and stress for Depp’s character. He dogs Mort for the manuscript that Mort claims he wrote and that he did not steal from him. He threatens to make Mort’s life miserable and place all kinds of charges on him. Those threats start to put Mort in a place where he cannot runaway from his problems. The other issue is that this is not the only issue for Mort, the other issue is finalizing his divorce with his Amy. Mort being set in his own ways prevent him from his other responsibilities in his life, and he does not have very many.

For Koepp, I felt “Secret Window” was an average film for him to direct. The film may seem predictable, but it is not. Many of the unanswered questions in the film are the opposite answers of what his viewers think. That is why I have grown to enjoy “Secret Window” in the amount of times I have watched it. The sense of dramatic irony that Koepp uses leads to a catastrophe in one moment of the film or the other. Did Mort steal John’s story? Did John commit those crimes? All are questions that has a wild explanation towards the climax of the movie. That is why I find “Secret Window” as a film that is worthy of a viewing every so often.