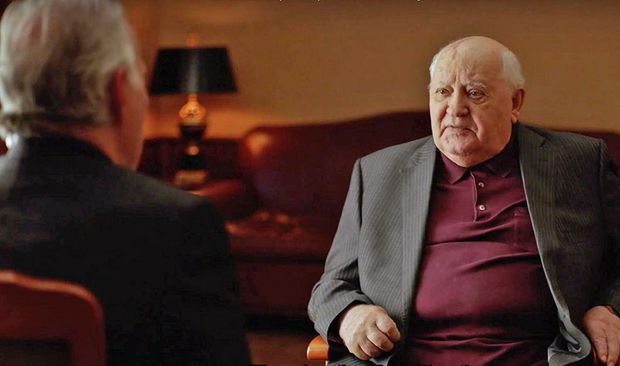 For Werner Herzog, he is definitely an auteur and impressive director due to his vast array of  memorable films ranging from Aguirre, the Wrath of God (1972), The Great Ecstasy of Woodcarver Steiner (1974), Stroszek (1977), Nosferatu the Vampire (1979), Grizzly Man (2005), and Rescue Dawn (2006).  Meeting Gorbachev is a documentary about the life of Mikhail Gorbachev, the eighth and final president of the Soviet Union. Meeting Gorbachev is visually engrossing with its vivid information and background scenarios regarding Gorbachev himself, but requires a serious amount of attention to fully understand the political issues detailed in the film. Herzog’s narration and interviews with Gorbachev will leave viewers deep in thought and in curiosity.

The focus of the film is Gorbachev, including his role in the talks about reducing nuclear weapons, the reunification of Germany and the dissolution of Gorbachev’s country. The film explores these scenarios in multiple ways but is confusing at times. I found that Herzog tries to be as faithful to Gorbachev’s words as he can be, but when the topics jump back and forth it was challenging to determine exactly how the political issues correlate together. The film still held my attention, partly because Herzog’s dark and heavy slurring voice makes his viewers want to listen closely to his films when he is doing the narrating.

The film did take me back to Grizzly Man because of how that was also a film based on actual events as Meeting Gorbachev is. That film had lots of background information on bears and how a man got himself hurt filming them which was overall much easier to understand than this current film.  Meeting Gorbachev is a film that requires some knowledge and even background research for viewers to completely understand the main points as well as the conflicts during Gorbachev’s time as president of the Soviet Union. Herzog is deep in conversation with Gorbachev, but there is so much dialogue between the two that I wished at times that I could rewind the movie while I was in the theatre. When I could not follow the conversation, I felt I missed certain elements.  This, in turn, kept me from understanding what the outcome of certain  events were later in the film.

Overall, this is a thought-provoking documentary. If viewers are fans of Herzog, then this is a must watch.  From my vantage point, it is not amazing, but it is memorable. This film is different for Herzog, but he still is faithful to it being believable and accurate. I did enjoy its short time frame of ninety minutes, and I believe others will as well. For Meeting Gorbachev, I give it three solid stars.