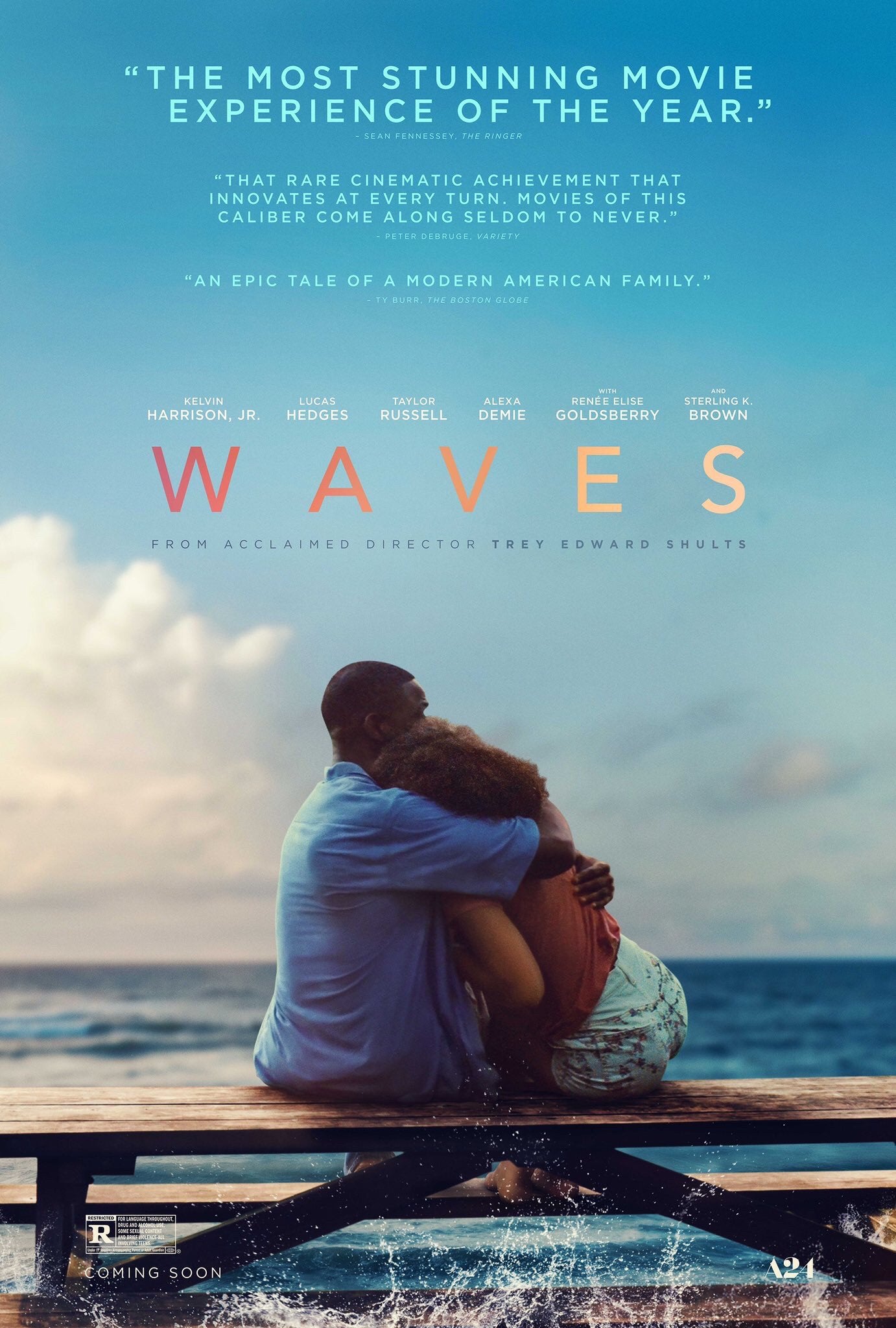 When it comes movies about teenagers trying to meet their goals and fulfill their parent’s expectations with accomplishments athletically and academically, Trey Edward Shults’s Waves is a deep and haunting experience. The movie is filled with scenarios of successes, disappointments, failures, irreparable consequences, and the life after a major tragic event. Kelvin Harrison Jr. is the lead, and this is one of his most memorable movie experiences. While I thought his performance in Luce this year was his best, his performance in Waves tops it. The film also stars Taylor Russell, Renee Elise Goldsberry, Sterling K. Brown, Alexa Demie, and Lucas Hedges. They all deliver knockout performances that makes Waves a narrative gem that I believe is one of the best films of the year. This engaging film is about a family that goes through hard stages in life and tries to navigate after harsh events have occurred.

The film takes place in South Florida and Kelvin Harrison Jr. plays Tyler. Tyler is athletic, academically inclined and has a decent set of peers.  His demanding father, Ronald (Sterling K. Brown), wants Tyler to push himself above his limits athletically with wrestling. Tyler is already in the mind-set that his life is going well and that he can deal with some distractions. Those distractions, however, cause his life to start to go down-hill. He realizes that he has some physical health issues so he should not participate in athletic events. However, he tries to still do so by experimenting with pills and all kinds of supplements to help his body be able to handle the impact of his sport. This is a bad idea and causes Tyler to be severely injured.  Still, he still has the chance to do well academically, but he starts to fall apart, because sports and exercise have been his life.

Tyler believes at one point that his life is still solid, but then he gets to a point where his world is rocky. He finds out that the girl he is dating is pregnant. And, since Tyler has already been drinking and experimenting with drugs, his attitude and anger spiral out of control and cause him to make increasingly poor decisions. His sister, Emily (Taylor Russell), realizes he is going to get himself in trouble, but she does not do much to stop him. His stepmom, Catharine (Renee Elise Goldsberry), loses her ability to prevent Tyler from doing harmful behaviors because he is already out of control. Unfortunately, Tyler does something that carries heavy criminal charges and puts him in jail for a long time. This impacts Emily because she feels her social life is going to be negatively impacted given her brother is a criminal and lots people in their school and neighborhood know what he has done to put himself in jail.

Years later, the film gears on Emily and her new relationship with her new boyfriend, Luke (Lucas Hedges). She starts to grow a close relationship with him because they are both introverted. They begin to bond and share their past experiences of why they remain quiet and do not come out of their shells. In those moments of connection and disconnection, Waves will leave viewers in tears. Slowly, Emily begins to realize that despite what her reputation may be (based on her brother’s actions), there is still good in the world and people do care. She even opens up about the issue with her dad and stepmom causing them to realize that they can still be happy if they look at what qualities they have to offer the world. Waves is one of those movies that is poetic because the message is how to live life after tragic events and how to be thankful for what there is in the world in the good times and the bad. Tyler may have messed up, but does that mean his family cannot love him? Does Emily have to remain a ghost the rest of her life? Can Emily’s father be a good role model to Emily? The film has many questions as well as answers. It is sad in some moments, but also quite uplifting.

I am giving Waves four stars, because the film defines what life can be after something unforgiveable.   It also shows that resentment and hate are not the answer. The answer is to accept and move on (over time, but positively). I loved this movie and even cried during a few scenes. I was looking for resolutions where there is hope, and Waves offered a lot of those resolutions. The message is to never give up. Do not miss Waves.