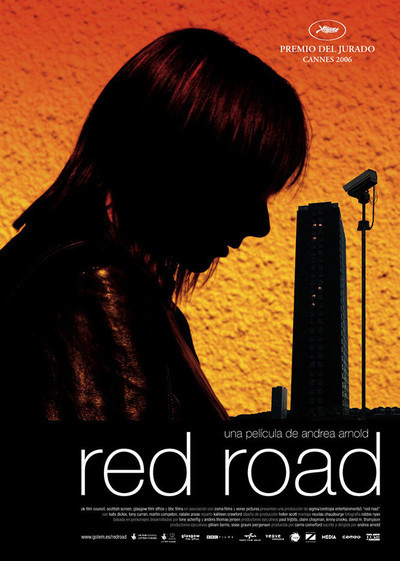 While still being in quarantine, The Criterion Channel has allowed me to explore and figure out why particular films fall under the category of Criterion. I came across the 2006 thriller and drama, Red Road (directed by Andrea Arnold). Red Road is a contemporary film in which the main character, Jackie (played by Katie Dickie), finds herself warped in an obsession with following someone who has impacted her life in the past. Jackie monitors security cameras daily to catch anything that looks suspicious or crime related. Red Road is a quiet film with faded cinematography which effectively depicts Jackie’s obsession which leads her on a trail to seek revenge.

The film takes place in the United Kingdom. Jackie works as a CCTV security operator and her mind is always consumed with identifying emergencies. That all changes when she comes across a man on the monitors that has caused severe damage and (supposedly) was the reason why she has suffered from post-traumatic-stress-disorder for some time. In the film, we learn that Jackie lost a daughter, and she believes Clyde (played by Tony Curran) was the reason for that tragedy. As Jackie becomes fixated on following Clyde’s everyday adventures on the security monitors, she feels compelled to follow him. She starts to exhibit elements of stalkerish behavior, and it is not just through the security monitors, but by involving herself in his life outside of her job. This leads to Jackie to put herself in some harmful situations as she is determined to figure out if the damage he caused her was intentional or accidental.

Red Road’s tone was subdued but technologically inviting. I was captivated by the film, not due to the story alone, but because of its technological brilliance. The realism of the emotional story is shown through the method of the Dogme 95 movement. This is where the cinematography is in use with visceral handheld camera work and natural lighting. Since the film had no high-end cinematography computer effects, it makes Red Road feel like the main characters are in a real-life conflict especially through the showcasing of Jackie’s emotions. The film’s conflict is realistic in that it is not unusual for someone to wants answers to why their life may have had a tragic encounter.

I found that the film was intriguing due to the outcomes of Jackie’s persistent, stalkerish behavior. There are moments where she over assumes what may or may not be true. Also, she realizes that elements of Clyde are what she believed them to be. And, with Clyde’s dark past, her judgment impacts him more by causing additional legal troubles, given he already is on parole due to prior charges. This makes Jackie start to consider if she wants him to suffer more or if she wants to understand whether the tragedy which impacted her was truly a mistake as many car accidents are.  Red Road is a film that is a journey searching for answers through both security cameras and personal stalking.

This film is not for everyone and reviews have been mixed over time. I feel like it does fit with the Criterion Channel and because of its contemporary technical advancements. Red Road is a film that speaks to a limited type of audience, an audience who can handle emotional elements, and who feel that true independent movies speak to them. Red Road is a cleverly crafted thriller, but it is not amazing. However, it did hold my attention through the natural cinematography that the film has throughout its two-hour running time. I give Red Road three stars.