I thought to myself today that there are a bunch of Oscar films that are brilliant and that have won and not won. I have chosen however to review one that was nominated back in 2008, it i did not win anything but I love this movie. And it is “Into The Wild.” 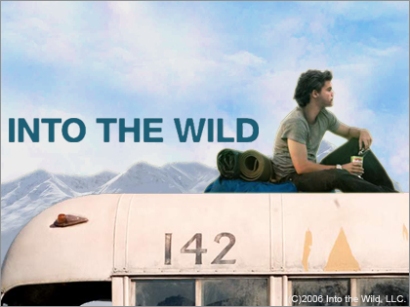 I have seen many movies about nature and the outdoors, however, “Into the Wild” is a whole new experience of the wilderness. Emile Hirsch, Catherine Keener, Jena Malone, William Hurt, Marcia Gay Harden, Vince Vaughn, and Hal Holbrook are broad in this biography film about the real story of Christopher McCandless. I have read the book as and have seen the movie which made me look more into the biography and was just amazed by how this film is based on a true story.

“Into the Wild”is about a man named Christopher McCandless. McCandless is a graduate from Emory University, top student, top athlete, and someone who chooses to abandon all of his possessions. He does all of this that way he can hitchhike to Alaska and have the time of his life toe get away from society. McCandless however, encounters many characters along the way and they help him shape his life.

The people that McCandless meet are people that he becomes very close with. These people include a hippy but funny lady Jan Burress (Keener), a man who works in cornfields Wayne Westerberg (Vaughn) and a man who is retired but owns a workshop Ron Franz (Holbrook). McCandles makes a close relationship with these people just to make him feel more at home because his parents Mr and Mrs McCandless (Hurt and Harden) are basically all about being rich and wealthy which only leaves Christopher to feel that he wants more out of the world than living the high lives of being rich. His sister Catherine (Malone) understands why Christopher has runaway and since they have such a close relationship she chooses to be no help to her parents trying to find him because she feels he deserves to do what he wants.

This is one of my favorite movies of all time. I am someone who has been on many sightseeing tours from time to time, but “Into the Wild” makes me feel like I just have to go to Alaska now. The moments of weather being a problem, preparing for certain seasons, and not being able to have things go as planned because of conflicts arriving at the last minute. All of that makes me tempted to actually want to jot a bunch of notes in order to help me have an adventurous trips trying to avoid the obstacles of the disasters that can be encountered. “Into the Wild” really shows what is more likely to happen when you are not prepared for what is coming when going solo on a long Alaska trip.

This is the fourth film directed by Sean Penn. For this movie, he also wrote the screenplay. Since it is a true story though, Penn had the idea for a while, but waited ten years to make the film, because he wanted permission from the McCandless family before making it. The waiting of the film honestly built up to the potential, because this gave time for Penn to gather more information and old material used by the real Christopher McCandless. The diary he wrote in, the abandoned bus, and the people he met, all helped to make the movie as accurate as possible to the true story.

The cinematography of “Into the Wild” is stellar. The director of Photography and cinematography Eric Gautier did the same cinematography as he did for one of my other favorite films “The Motorcycle Diaries” which was made back in 2004. What I liked is how for both of these films he makes the views and the skies in every scene outside so breathtaking, that you cannot look away. Especially with the fact that it is the big planet of brilliant outdoors and one character enjoying it all. It feels like “Cast Away” but with a more positive setting.

How does the story end? Find out. Watch “Into The Wild” and see what actually happens. I love this film and will watch it a bunch and still will. I remember seeing it years ago not having the highest expectations, but then was blown away by the film and the book itself. It did not win many awards but it is still epic.