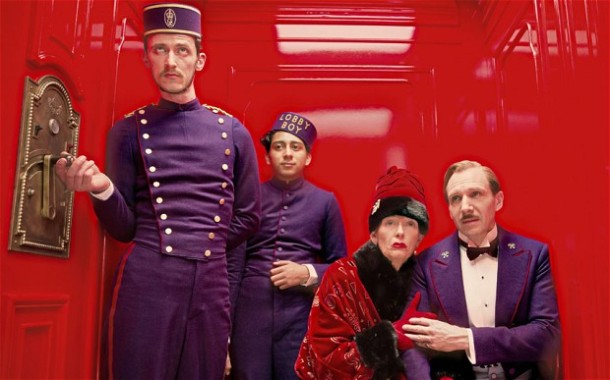 After seeing Wes Anderson’s “Grand Budapest Hotel,” I will say…a bit overdone. With Anderson I am use to his films being his own creative world or setting that seems fictional yet realistic and it is like this with “Grand Budapest Hotel.” However, it is not the art side or photography that is overdone, it is the amount of big name actors that are in it.

I will admit this movie is one that I did enjoy, but at times was having trouble figuring out why tons of big name actors were rounded up. Where really the main focus was on Ralph Fiennes (as Gustave), Adrien Brody (as Dmitri), and Willem Dafoe (as Jopling). There were many other big names such as Owen Wilson, Bill Murray, Harvey Keitel, Jude Law, Jeff Goldblum, and more. All good actors but why even bother mentioning their names where they are only in the film for a brief second? Is it just because of hollywood? Or is the independent filmmaking of Wes Anderson just all about making more money?

In this film, the conflict is one that is creative and a brilliant idea. Gustave is a well-known concierge at a popular European hotel. Along side Gustave is his lobby boy Zero Moustafa (played by Tony Revolori). Moustafa is his most trusted friend. Together, Gustave and Moustafa both go on a journey that involves theft and recovery of the Renaissance. All trying to fight for a big family fortune. The crazy portion of the misadventures and conflicts in this production, is the fact that all of these events happen at the back-drop of a negatively changing continent.

To be honest this movie had a good premise, but just it had more actors than it needs. I know I mentioned earlier in the second paragraph that these celebrities really did not show a big importance in this picture. I have seen many films where many celebrities are rounded up for a film and is either really good (in my opinion) or just gets bad reviews because of critics criticizing the film. I recall once watching a movie “Cloud Atlas.” A science-fiction masterpiece by the Wachowski brothers where people’s live intersect at a variety of certain points in their life. That movie I really enjoyed with the fact that it had a ton of big names. Not because of popularity of those celebrities, but the fact that every character played a variety of different people. “Grand Budapest Hotel” on the other hand just really seemed that all of the other celebrities were just for advertising purposes, since in the movie, they did not seem to have a big importance to what was going on.

The photography in “Grand Budapest Hotel” however does hold my attention. Mustave owns a huge hotel in the alps of Saxony, Germany. Everyone believes Mustave murdered a lady he once loved. As soon as it is believed to be him. Absurd acts of violence, language, and catastrophe all hits the hotel. I got really captivated by how all of the hotel is going down. The funny portion about it is, it is comical in the artistic sense. Therefore, no one feels sickened by gore, as if they are watching a Quentin Tarantino film.

I want to get down to comparing “Grand Budapest Hotel” to Anderson’s previous films. My one time all favorite film by Anderson is “The Royal Tenenbaums.” The topic is sad in most cases and has a ton of celebrities, but the fact that everyone in the film is inter-connected is what makes that movie brilliant. I thought with “Grand Budapest Hotel” that everyone was going to be interconnected with the suspense and all, but they were not. They were just put in it simultaneously and did not really have much to do with the suspense. “Grand Budapest Hotel” will leave most viewers wondering why they did not see Bill Murray in the movie all that long, along with Jason Schwartzmann, or Owen Wilson.

“Grand Budapest Hotel” is a satire and is a work of art, but just lacks in the production process. I think the organization is not entirely right with this Wes Anderson picture which led me to be somewhat disappointed. Since I looked in numerous locations to see this movie for how limited its release is right now. Overall, two and a half stars.