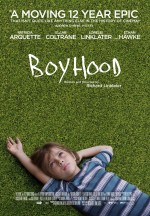 Written and Directed by Roberto Espinosa

A boy looks up at a perfect blue sky as he waits for his mother to pick him up. The soundtrack blasts Coldplay’s “Yellow” and the opening lyrics perfectly match the mood of the film we are about to sit through. In Richard Linklater’s new film “Boyhood”, we follow our main protagonist, Mason Evans, played beautifully by Ellar Coltrane, age from an innocent five year old to that of a rebellious eighteen year old, all throughout the time span of 165 minutes.

Mason starts out as a daydreamer, always being told by teachers to pay attention and to turn in his homework despite having done it. He also overhears his mom, played by Patricia Arquette in a very notable performance, argue with her failed relationships who always seem to be alcoholics. Yeah, this movie is not very alcohol friendly, sometimes in a very “after-school special” way but I’ll get to that in a bit.

But it’s not just Mason. Everyone else in this film ages as well as progresses as the film goes on. We have his incompetent older sister Samantha, played by Linklater’s real life daughter Lorelei Linklater, his mom who just can’t seem to get a break, not just with her love life, but her life in general due to having kids, her job, having to move multiple times each time a failed relationship happens or she finds another job that pays well, and her relationship with her ex-husband, played by Ethan Hawke. When he visits the kids, he has this lovable energy that really wants to keep you going. The kids seem to love him and he always comes with these great philosophical statements that will hopefully get them somewhere in life, even if they are a little odd. One of my favorites being when we first meet him, he takes them bowling. Samantha is striking it out and Mason starts out not doing so well, complaining that he should just use the bumpers to which his dad replies, “You don’t want the bumpers. Life doesn’t give you bumpers.” Even during all the scenes we get with him and the following statements or notes in life we’ll be receiving, that one never seemed to leave me. Maybe it’s because it’s so simple and yet says so much about what comes as the years progress for young Mason. As the film progresses, we see him grow more attached to his dad as he’s the one who provides almost all the answers for him and his life. As for Samantha, she seems to grow less and less, providing one to three word sentences to finally just listening to her iPod as the boys talk. We’re never given a real reason as to why his mom and dad are divorced except for a small statement by his mom and a scene of Mason looking out the window and seeing them arguing so I think we’re meant to put the remaining pieces together by ourselves but then again, we don’t really need it. We’re looking at life through his eyes so in a way, we’re just as confused as he is.

The first hour, hour and a half of this film is made up of pure, simple nostalgia. Anyone who was born somewhere in the 90s who sees this film will probably have flashbacks of where they were in their life when they see certain moments of this film. There’s a scene where Samantha successfully annoys a sleeping Mason by singing one of Britney Spears’ latest tracks. When they first move, the soundtrack blasts Sheryl Crow’s “Soak Up the Sun”. Their mom reads the kids a passage from “Harry Potter and the Goblet of Fire” and they even dress up and attend the midnight release of the latest book, “Harry Potter and the Half-Blood Prince” and while I myself have not done this, I can only imagine what that must’ve felt like. But then there’s a moment where dad discusses his kids about Bush and post-9/11 politics and just like “Margaret” a few years back, I’m taking back to a very confusing time in my childhood where we put the finger on an inexperienced president and demanded reasons for why we were doing what we were doing back then.

But as expected, as Mason gets older and older, the film becomes less cute and starts sucker-punching you with reality. His first stepdad who at first seems like a nice guy and is a college professor, has two kids from a previous marriage and it seems like a nice family. But then he forces Mason to get a haircut leaving him almost bald and starts to resent him. He then turns out to be a rather violent alcoholic causing mom and the kids to leave unexpectedly. The kids all ask her what’s going to happen and what to do next but she doesn’t have all the answers, a sad but true pain. I’ve never been a parent but I’ve seen those tears before through my mom when she didn’t have all the answers.

As stated before, all of mom’s ex-boyfriends/husbands (save for Ethan Hawke) all turn out to be alcoholic a-holes which lead to turning point moments of resentment. When Mason first has an encounter with alcohol, it’s not by choice, but more by pressure. The kids he’s hanging out with offer him and another friend beer and calling them “pussies” and “faggots” and saying that they’ll never get laid if they don’t do so. This is where the “after-school special” feel comes in and usually I’m not a fan of that because it’s nowhere near subtle and comes off as unintentionally cheesy but since we’re still seeing this through Mason’s perspective, you could say that that’s how he sees this. It’s my only flaw with the film but it’s completely overshadowed by everything else I’ve seen.

We see him do drugs, meet girls, make out, have sex, having hopes and dreams of wanting to be a photographer and even taking “artsy” pictures of the world around him, pretty much the basics of what a teenager on the verge of finding himself would do. But he also develops a very cynical personality based on the world around him judging from “things he reads” and his own past experiences. He asks his dad if there is any “real magic” in the world and then later on states to his girlfriend that we are all slaves to the technology that sits in the palm of our hand every hour of every day. He talks about the future and where his or the life of everyone else will go and as I’m watching, I too am asking that question. I may be done with high school and have my career set in front of me but even then, I too question what will happen in a year or so and fear the day I’ll have to make a choice. Yes, everyone else has to as will I but it’s a real fear and this film forces not just me but anyone who has this problem to really think about that.

It’s not a hard film to watch but it does question you to think about your life and whether or not you lived it the way you wanted to. If you’re an adult, then maybe you’ll flashback to a time when everything was simple for you since everyone on the internet seems to be obsessed with nostalgia as if it was a drug that will help you get through the day. Keep in mind, not every memory of “back in the day” is a good one, depends on who you are. Many of you will probably connect to Mason while I myself can’t. The only way I can is through his emotions and what he’s going through, a big one being the confusion he has due to a breakup with the person he thought was “the one”. The soundtrack is just simply incredible, each track layering the film and mood perfectly. We all have those memories that come with Sheryl Crow, Blink 182, Coldplay, Britney Spears, etc. playing on the radio or an intercom somewhere and it captures it just well. The soundtrack also develops as the years continue going from Phoenix to Lady Gaga to Gotye to Arcade Fire. This is literally the soundtrack of not just Mason’s youth but our youth as well and even today it keeps expanding. Also, I want a copy of Ethan Hawke’s “Black Album”. What is that? His own compilation of The Beatles post-breakup work, stating in the film as a birthday gift to Mason that there’s no real favorite Beatle and if you listen to them in their solo years in a row, it’s listening to them back together. That sounds like an awesome idea and I want to do it so bad!

What will happen to Mason? Well, that’s for you to find out or to answer yourself once the film ends. Maybe Richard Linklater will come back in ten years with “Adulthood” or something. Why not? If he can keep revisiting Jesse and Celine every ten years with the “Before” films, then why not here?