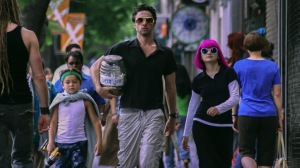 “Wish I Was Here” was written and directed by Zach Braff. The film’s success was because of Kick Starter. Braff gave people the opportunity to invest with Kick Starter and his fan website as well. He stated that donations would lead to prizes such as private screenings, movie scripts to keep, and more. The idea worked perfectly, thanks to three-milliion dollars being donated by forty-six thousand, and five-hundred and twenty contributors.

Zach Braff, who plays Aidan Bloom, is in a place of stress in “Wish I was Here.” He is tight on money and carries a swear jar, but he actually does most of the swearing in his household. Aidan allows his two kids. Tucker Bloom and Grace Bloom (Pierce Gagnon and Joey King) to curse so more money can go into the swear jar.

Later on, we find out that Aidan’s dad Gabe (Mandy Patinkin) pays for the tuition for Aidan’s kids to go to private school. That is because Aidan loves acting to make money (similar to “Garden State), but is not having the best luck with auditions which leaves his wife Sarah Bloom (Kate Hudson) to be making most of the money with her desk job.

Aidan’s motivation for success is abound when he finds out his father has cancer. This leaves Aidan to want to to make life a joy for his children. He lets his daughter (who shaves her head) buy a wig and takes them for a thrill ride in an Aston Martin. Soon after, he seeks reconciliation with his brother Noah Bloom (Josh Gad).

The movie’s focus is Aidan, Noah, Tucker and Grace on an uplifting adventure in the state of California, and it involves nature, Comic-Con, and costumes.

“With I was Here” is good, but not amazing; it has moments that drag a bit. But it is heartfelt and honest, with a director that has got a brilliant mind. Three stars.