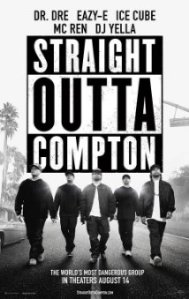 For fans of rap music, “Straight Outta Compton” takes the cake for one of the best film adaptations I have seen. The film is amazing, destructive, and an honest story of the rise of the group NWA. The film has many moments that will blow viewers out of the water. The story is enticing, the characters are ruthless, and it is not afraid to go over the limits on terms of music content. Director F Gary Gray makes his mark on one of the best films I have seen this year.

The film is set in the mid 1980s. Artists from the streets of Compton are coming out of their shells and showing their talent through their music. The artists are Ice Cube (O’shea Jackson), Dr. Dre (Corey Hawkins), and Eazy-E (Jason Mitchell). Cube is the poet, Dre is the one who makes the music, and Eazy-E is one of the singers. They collaborate their life events into spectacular music that holds tons of publicity. The popularity is vast where the more truthful they are to their lyrics, the more fans they get. But do they want to be that honest?

Their music tests authorities of California. This happens when subjects in regards to how they are treated is misinterpreted by the Federal Government. This basically goes for vulgar music towards police officers. However, they state, “Our art is a reflection of our reality.” Therefore, they believe they have the right to speak on terms of what goes on in their life because it is freedom of speech. However, this starts up numerous riots and lawsuits to name. I am not going to explain this because I want to elaborate more on what I enjoyed about this movie. I can probably talk all day about what I loved so much about the movie.

On terms of music, the scoring kept my attention. I’m not a fan of rap music really, but I found the music to be captivating. Joseph Trapanese is the man who did the music for “Straight Outta Compton.” I remember he did the music for “Tron: Legacy” (2010). “Tron: Legacy” had a really good soundtrack that I would listen to consistently day in and day out because of its beat track in its music. “Straight Outta Compton” beats is now what I’m listening too in my spare time. Just the rhythm puts you in the mood to want to feel like you are losing yourself into that rhythmic beat that is so intense where you can feel your chest beat.

The cinematography also was spellbinding. Just its color and all makes viewers feel like they are right in the 80s of this intense story. The cinematographer Matthew Libatique has a reputation for capturing great visuals with films he has been on. He does will with cinematography and photography in “Black Swan” (2010) “The Number 23” (2007) and “Everything is Illuminated” (2006). In all of these films including this one, viewers are really moved by the visual prints, however with “Straight Outta Compton” it is visually stunning where viewers will not believe their eyes.

Despite, the hard times these men go through in this movie, it is a brilliant one. I will even watch it again. I walked out of the theater with my mind blown by how spectacular the movie was. Four stars.