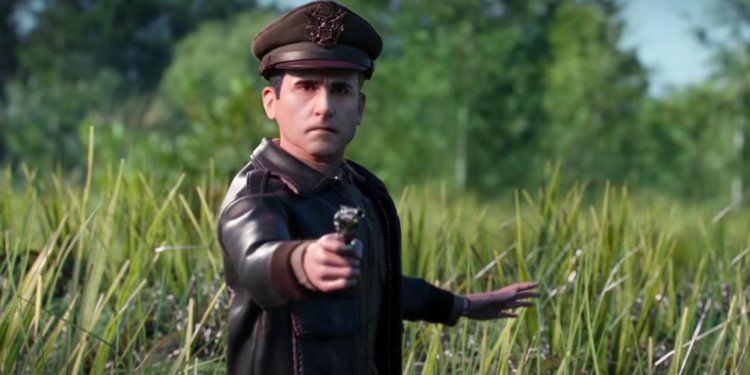 “Welcome to Marwen” was slightly misleading in its trailer. I did not find much memorable moments in the film. If there was any scene from this film that grasped my attention the most, it was probably when Steve Carell shouts, “We need more ammo!” “Welcome to Marwen” is not a terrible film, it is just stale in multiple portions of the movie. The opening jumps into detail without giving its audience a proper premise, viewers are introduced to multiple fictional characters without knowing their background, and on top of that the film feels like it goes off topic quite a bit. I found this movie to be like “Toy Story” (1995) meets “Back to the Future” (1985). That is because a majority of the film consists of talking toy characters and its in the past future back in time (in the mind of Carell’s character).

The film is a true story about Mark Hogancamp (Carell), a man who is brutally beaten by five men and ends up suffering from brain damage. Due to this he becomes an artist with telling stories. To put his memories in order, he creates a world called “Marwen.” That world consists of a made-up World War II setting. In the film, he eventually has to go to court to testify against his attackers.

Now this film was all over the place. The film focuses so much Hogancamp’s world and not so much on him. From the trailers, I felt there would be lots more in depth storytelling or background fragments to help us better understand Hogancamp. There is really not much of that though, it is basically just the world of “Marwen” in so many moments of the movie, and Hogancamp is barely in the picture. I felt I probably saw the main character at the max four times in the film. Now I know Carell has been on a role this year with many great films ranging from “Beautiful Boy” and “Vice” this year, but this is honestly not one of his best films. His performance is terrific, but the filmmaking and story lacks entirely.

For director Robert Zemeckis, this film is probably one that has tanked badly for him. The film had a budget of $40 million and it debuted only 2.4 million. This is unfortunately a big failure for a holiday film. However, I think that is also because nothing can compete with Aquaman or Mary Poppins Returns. I guess no one really cares for a film about a fictional world this year.

I found “Welcome to Marwen” to be a film that should just be straight to streaming. I did not hate it, I was just completely lost. Even when I walked out of the auditorium, I was left with many unanswered questions about certain elements of the movie.