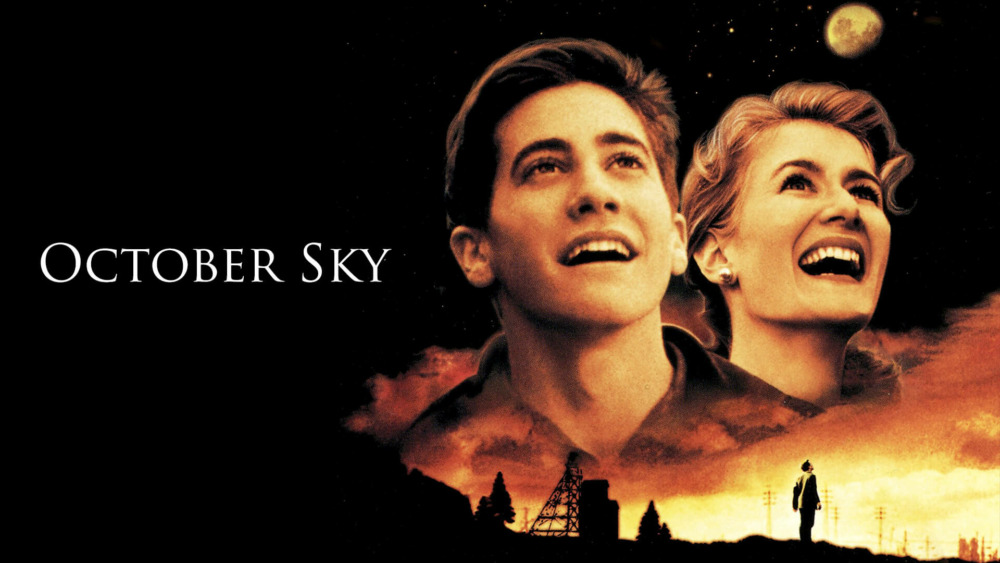 I came across “October Sky” when I was like age eight or so. I remember not being fully enthusiastic about it at that age. However, I began to appreciate “October Sky” more when I was about age twelve or so. Now, I’m 25 years old, and I view “October Sky” to be a faithful and true story to what it means for someone to follow their dreams. Also, for Jake Gyllenhaal, I definitely would say this film to be one of his most recognized performances of his career. The film is charming, faithful, and true to its real-life adaptation on the life of Homer Hickam (Gyllenhaal).

Hickam is the son of a coal miner, John Hickam (Chris Cooper). The Hickams live in a small town called Coalwood which is in West Virginia. The year is 1957 and the first artificial satellite goes into orbit and its called Sputnik. Homer is fascinated by the science behind Sputnik. This leads Homer to have an aspiration to build rockets. For Homer and his friends, this becomes a big deal for them, however, his father and a majority of the town believes that Homer and his buddies are wasting their time and energy on something that is ridiculous. One person that has faith in Homer is his science teacher Miss Riley (Laura Dern). Riley believes that Homer has potential to be first in a science fair and has a bright future for him if he continues with his rocket science. Homer’s father still thinks otherwise. However, Homer and his buddies continue to build their craft and accept trial and error with their rocket experiments. The film becomes one that challenges controversy, disagreements, and many tensions for Homer. Not just tensions for Homer and his father, but also for those around the small town of Coalwood.

For Homer, he does not really care about impressing his father. That is because he knows that he is capable of doing something extraordinary with his craft and rocketry. On the other hand, his father really only cares about Homer becoming a coal minor or finding something else to do other than rocketry. As the film progresses, the tension builds between Homer and his father. There is a point in the film when Homer and his father have a huge argument. For both Gyllenhaal and Cooper, the argument is a knockout performance. More for Gyllenhaal. Viewers can feel the tension in Homer’s heart as he is fighting with his father and yells, “I’ll be gone forever, I won’t even look back!” This just shows how serious Homer is about following his dream. The director Joe Johnston does an excellent job with the direction for these argument scene.

The time period in “October Sky” being the 1950s really shows the challenges of building a rocket that Homer comes across. The technology in that time frame was not much developed at all. They were not any VCRS, DVDS, fancy TVS, the telephone was still fairly new, and also there was not a lot of resources to Help Homer research for his rockets because there was no internet. The film incorporates this with moments of Homer asking a nerd friend about science and such and also trying to figure out math equations the hard way. He also looks into chemicals that he believes will be stable for his rockets. “October Sky’ challenges the viewers in terms of wondering how Homer is going to succeed.

What I love about “October Sky” is the message basically being to follow your dreams. Homer is not giving up or letting people bring him down, he continues to strive for what he wants to accomplish. I feel I can relate, because in life I want to be a true critic. I know it is a challenge to be a critic, but I am not going to stop writing reviews, I am going to write reviews until it gets me somewhere. Homer got somewhere.