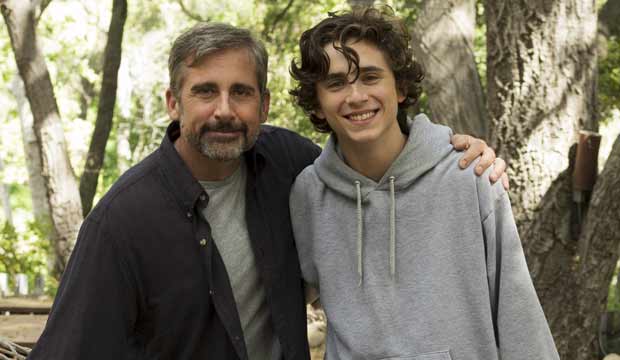 I finally saw Beautiful Boy. It was definitely heavy, but both Steve Carell and Timothee Chalamet are brilliant. It is a film that shows how far people will go to save the protect the ones they love. It has many moments that are heavy but it is powerful and engrossing. Chalamet is nominated for best actor in a supporting role in the Golden Globes on Sunday he is worthy of the award. Carell’s performance is also Oscar-worthy. The film challenges a dad and his son (Carell and Chalamet). Carell is a man that is doing all he can to help his son be completely clean from using drugs to get by in his life. The film is a heavy journal that is powerful, bold, and a true story.

David Sheff (Carell) has a son who has a history tons of drug usage, and his son is Nic (Chalamet). Chalamet is completely in denial when it comes to being questioned about his drug usage. That is because his system is full of all kinds of dangerous substances. They range from alcohol, meth, cocaine, and more. Throughout the film David does every possible research he can to help Nic follow steps to getting himself out this horrible habit, but Nic keeps on being dishonest and relapsing. He has his moments where he acts like he is clean or doing well for short periods of time, and then he goes right back towards drugs, bad decisions, and all other kinds of disasters. This starts to leave David to run out of options in terms being a support to Nic. That is because Nick keeps lying, using, and his consequences start to become irreparable.

For Chalamet this film is a transformation for him. He went from being the geeky and cool student in “Lady Bird” (2017) and “Call Me By  Your Name” (2017) to the pale, dry-skinned, and teary-eyed and depressed Nic Sheff. Chalamet lost 25 pounds to play the role. He plays the role very well and is faithful to the depressed real-life character in which he portrays in this sad, but vivid masterpiece. Also it is a transformation for Carell, he went from being the cranky and opinionated Michael Scott from “The Office” (2005-2013) to the worried, but also hard working father that will do whatever it takes to bring his son to recovery. Both are just very memorable in “Beautiful Boy.”

I also felt the film reminded me a lot of what is going on in today’s society. There are many people who are struggling with addiction, and “Beautiful Boy” has a message to that, and that is relapse is part of the process of recovering. Nic does not get better overnight, he has multiple ups and downs where he is better and then falls apart again, and viewers are thinking if Nic is ever going become a better and stronger person in his life.

For director Felix van Groeningen, this is his seventh film as a director, and in the process of editing “Beautiful Boy” it took seven months. With that the movie was recut a generous amount of times, however Van Groeningen wanted the film to be perfect and he found an editor that he has worked with for a while at the last minute to help him. That editor was Nico Leunen, and when he came in, I believe that brought out “Beautiful Boy” to be as visually moving and emotional as it was. The editing and the pacing will movie viewers to feel they are in the heavy world of challenges there is for Nic Sheff.

Another factor that was riveting with “Beautiful Boy” was its screenplay. The writer for it is Luke Davies and he did the screenplay for “Lion” (2016) and that was another movie I was deeply moved by as equally as I was with “Beautiful Boy.” Davies writing in the screenplay is quite realistic and intense where it makes its audience feel they are part of the problems in the film. This would be more on the elements along the lines the scenes of disagreements and arguments between Carell and Chalamet.

“Beautiful Boy” is a must watch. I will say though, be ready for its heavy theme. The world of drugs and addictions is not a pretty place, and it was not for Nic Sheff or his father. There is so much more in the world for Nic, and his father tries to help him realize that he has so much to offer the world, and that what he is doing to himself will not make the pain go away. It is a journey that viewers will feel moved by. Four stars.