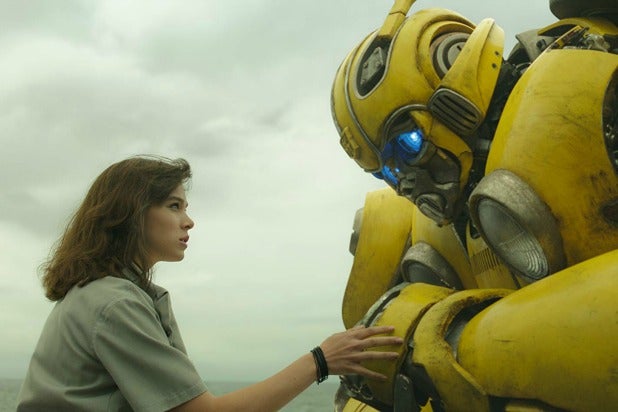 Now this is a “Transformers” movie that is actually worthy. It is not like the other ones directed by Michael Bay where they are close to three hours and have continuous explosions, confusing plot points, and characters that serve no purpose (a majority of the “Transformers” movies directed by Michael Bay has characters that make no sense to have). “Bumblebee” is a “Transformers” movie that is worth the time and money. The chemistry between Charlie (Hailee Steinfeld) and “Bumblebee” is captivating, there is a fair amount background to how “Bumblebee” comes as an importance in the film, and the best part….the main focus is Charlie and “Bumblebee.”

The setting of the film is the year 1987 in California. Charlie is struggling to come to terms with herself after losing her father some years ago. She comes across a yellow VW bug that is basically trashed, but she takes it, and soon begins to realize her condemned vehicle is “Bumblebee.” They begin a friendship and start to have some fun together. The film feels like it has the setting of “E.T. the Extra Terrestrial” (1982) but with a robot and a female. They create a friendship that is quite entertaining and heartfelt, and the best part, there is very little explosions.

I remember continuing watching the other “Transformers” films after the first one, and I kept on telling myself I was done with “Transformers.” However, even though a majority of them were poor experiences, I still sat and suffered through them because of all the frequent commercials and such. “Bumblebee” though was not a poor experience, it was a positive one. I like how the director Travis Knight mostly incorporates friendship over protagonist vs. antagonist (which was something that Michael Bay did in literally all of his films). Even though, I kind of liked the first “Transformers” I think somewhat differently now. I wish that robots had their own separate story in separate films and came to meet up in a film later (like “The Avengers” where it is part of a universe). With “Bumblebee” i found myself wanting to know much more about the robot’s story over why certain enemies are part of the conflict.

This film only had a budget of $102-128 million, and this is the least expensive “Transformers” movie that has been made. When I think about that, I just think now with the second, the third, the fourth, and the fifth “Transformers” that all that money was invested so much in countless and dreadful hours of special effects, buildings falling, explosions, and way too many where I asked myself, “What am I watching again?”

I believe this new director used the limited budget to focus solely on the meaning of its title. Knight has producing credits for mostly animated films and before “Bumblebee” he directed “Kubo and the Two Strings” (2016). He has also produced the two animated films “Paranorman” (2012 and “The Boxtrolls” (2014). They were decent animated films, and I believe for still being new in the game with directing, that Knight has made his mark “Bumblebee.” He is a director with a bright future ahead.

With the film’s time setting, I like how it takes place in the era with VCRS, cassettes, and old box TVs. That is because this one does not look into the future like other ones have, it keeps its place and time period as a serious component. The 1980s with very limited resources and the internet still becoming popular. That makes the reaction to its characters more intense because they are not used to seeing something so advanced like a robotic car. I remember in the first “Transformers” there are scenes where video games systems turn into robots along with other pointless technologies transforming, but that does not happen in “Bumblebee.” “Bumblebee” is one of the only transformations which builds excitement for its viewers.

Now, I am surprised myself that I enjoyed “Bumblebee” but the truth is I did. I had a great time with its laughing moments, its retro setting, and its funny humor with Steinfeld. Steinfeld is truly a talented actress with a bright future ahead. I find that she picks her roles carefully and this role was truly for her. Overall, it is a film that is definitely worth the time and money. Three and a half stars.