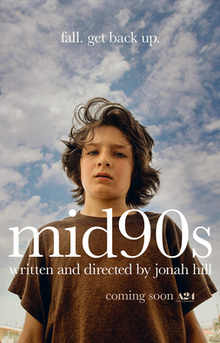 By the “Mid90s” tagline, “fall, get back up,” that is exactly what the thirteen-year-old Stevie (Suny Suljic) does throughout the film’s daring, negative, and dangerous behavior. Directed by Jonah Hill, “Mid90s” is a film where Hill has basically created “Superbad” (2007) but with teenagers and still for adults. Now “Mid90s” is that as graphic with language and drugs as “Superbad” was but the ages of the actors makes it feel hard, but also mesmerizing. “Mid90s” has a strong R rating and here is the listings of why it has earned that rating; pervasive language, sexual content, drug and alcohol use, some violent behavior/disturbing images-all involving minors. The final three words, “all involving minors,” will definitely be some disturbance to the film’s subject matter, but it is still a very worthy movie.

In “Mid90s” Stevie lives a life that is full of challenges for himself.  Ian (Lucas Hedges), his brother is abusive and he has a single mom (Katherine Waterston). Stevie tries to fit in with school and such, however his friends who are from the higher class families seem to view him negatively. Stevie roams the streets of Los Angeles in hopes of finding a group of friends to fit in with. He comes across friends at a skate shop. These friends are bad news, because they gear on heavy topics ranging from religions, ethnicities, and choices. This leaves Stevie to view life differently. He begins to become rebellious, joins his new hoodlum friends into breaking rules, and feels he is becoming someone that he is not. From that point on his life becomes to turn around positively for himself, but he does not realize his judgment can have consequences.

Throughout the film, Stevie attends adult parties and starts putting himself into awkward situations. He is already experimenting with drugs, girls, and getting into mischievous behavior to make himself feel cool. His brother Ian, still views him like he is nothing, by continuing to abuse him. The abuse that Stevie encounters at home is basically what makes him want to bend all kinds of rules to fit in with his gangster friends. With that element I felt like I was watching a younger version of Seth from “Superbad” but age thirteen. Ironically, Seth (who was played by Jonah Hill) is the director of “Mid90s.”

I did find this movie to be faithful to its element of a young kid wanting to be popular. That is because there are various moments where Stevie is trying to prove himself worthy by doing tricks on a skateboard that he considers rad and he is doing so to try to impress his friends. This was also because in this time frame, our internet was still evolving, and social media was not a big thing yet, so without that element, we realize that Stevie is trying to get his name out there through his presence in the vivid streets of Los Angeles.

For Suljic and Hedges, this is definitely a film they will be remembered by. Hedges is the bully and Suljic is the one trying to come out of his shell and prove himself worthy. Both do an excellent job with playing their roles with hating each other. For Hill being the director, I feel he is capable of directing more movies gearing on teens and popularity because of him playing someone who wants to be popular in a variety of movies. He did so in “Accepted” (2006), “Superbad” (2007), “Get Him to the Greek” (2010), “21 Jump Street” (2012), and “22 Jump Street” (2013). Now I feel he has incorporated his acting skills and inspirations to direct this disturbing but honest film about growing up.

I remember reading that Hill said once that “The Sandlot” (1993) was one of his inspirations to direct this “Mid90s.” I felt like also it had many similarities to “The Sandlot” but on negative terms. Instead of the teen characters investing their time in baseball history, going through multiple baseballs, and playing games all day, the teen characters care about mayhem and crossing boundaries with the law. Unfortunately, the destruction causes a majority of elements to go down hill. From that, I will say “Mid90s” is fun to watch, but it is quite negative. It is a ninety minutes filled with consistent swear words, uncomfortable discussions, and scenarios that definitely go over the line for minor actors. Three stars.