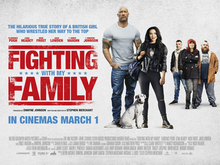 When I first saw the trailer for “Fighting with my Family” I thought Dwayne Johnson (who a majority of us know as “the Rock”) was going to play a big role in this movie. However, he is only in the film for like two scenes, and both of those scenes are about five minutes or so. A bit of false advertisement in the trailer, but the film is still fairly enticing given it is a true story. Director Stephen Merchant directs this comical, yet charming story of one girl who wants to follow her dreams to become a pro wrestler. However, I feel he finally incorporates some serious elements to this film. That is because he generally writes comically because he did the directing for the British version of “The Office” and other comedies. I feel that “Fighting with my Family” is Merchant’s step higher to making even better movies in his career.

The film is about Saraya Knight (played by Florence Pugh) who is the father of a former wrestler named Ricky Knight (played by Nick Frost). Her dream is to join the World of Wrestling Entertainment. Therefore, Saraya and her brother Zak (played by Jack Lowden) go an audition for the wrestling competitions. Saraya makes it but, and Zak does not. The coach is Hutch (played by Vince Vaughn) and he is serious, opinionated, and all about business. Saraya is following her dreams of what she wants to do for most of her life but comes to realize that being a pro wrestler is not totally as easy as it seems. She looks up Dwayne Johnson and other wrestlers, but their encouragement is not very helpful. This will be a long road for Saraya, and she must overcome many obstacles for her dream to come true to step into the ring in front of thousands of people around her and watching from around the world on television.

“Fighting with My Family” is decent with its background and actual real-life stories to the pro wrestlers that were wrestling back in the day. The film has moments where it compiles clips of Dwayne Johnson, Triple H, and other wrestlers from the early 2000s. Also, the film does take place in the early 2000s. Right before smart phones, streaming, and all other kinds of technologies were not advanced yet. I find that “Fighting with My Family” shows how our limits with technologies, made events on pay-per-view (like wrestling) were very popular. That is because those events would take place only once.

I feel that “Fighting with My Family” is one that is worthy of a viewing. Maybe forgettable at moments, and somewhat written averagely. I feel that there were elements where the film was not as focused, and primarily cared on Saraya a lot. That is not a bad thing, just the trailer made it sound like other names would play a big role in the movie also. However, it is a fun watch for the family and all. Especially for those who like wrestling.