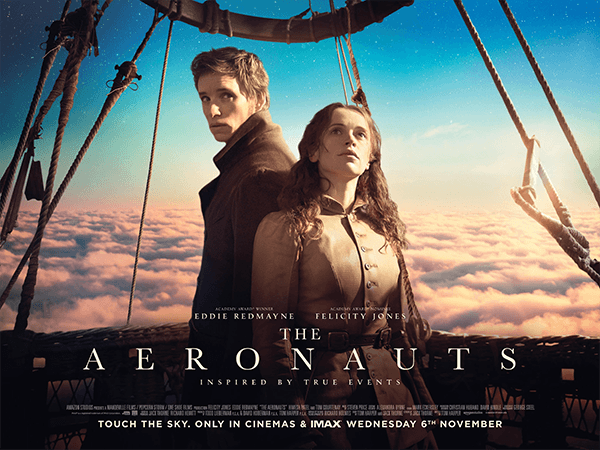 Compared to films that feature traveling high in the sky off the earth, The Aeronauts is a masterpiece that shows the obstacles that exist to seeing the earth from the sky with little to no technology. The film is pristine at showing the tools that are utilized for flying a hot air balloon, however, they only remain that way for a limited time as the two main stars go higher in the sky. Eddie Redmayne and Felicity Jones are in the perfect roles for this movie. After their brilliant performances in The Theory of Everything (2014), they shine once again in The Aeronauts. Director, Tom Harper (who directed some Episodes of Peaky Blinders on Netflix and Wild Rose last year) creates a visually stunning and emotional thrill ride where Redmayne and Jones must rise to the challenge and obstacles they have above them. It is a ride that is full of interesting questions.

The film gears on James Glaisher and Amelia Wren (Redmayne and Jones). Glaisher is a scientist and Wren is a pilot. The year is 1862, and Glaisher’s fascination with meteorology puts him on a mission to advance human knowledge by going up in a hot air balloon thousands of stories high. His goal is to go higher in the sky than anyone has in history. They succeed in accomplishing their mission to go up higher than anyone has been before, but then Glaisher does not want to stop, but instead keep going higher and higher. The film is structured and provides numbers and signs at moments in the movie as they continue their journey until it eventually becomes dangerous. The temperature decreases massively, they do not have much oxygen, and their tools for descending start to fall apart as the cold winds cause them to malfunction and not work effectively at all.

What grabbed my attention the most about this movie is the fact that they are surviving that high up with little food or water. Also, the fact that there are no electronics for emergency purposes. Glaisher and Wren rely on each other and think together to figure out how they will descend safely without dying. This tests their patience with each other. Wren wants to descend because she knows there is danger, Glaisher wants to continue so he can make history by making a discovery that he feels only he can make. Glaisher even puts his health aside to attempt to go up farther. That is the point at which Wren starts to find herself having to figure out the tools solo, because Glaisher begins to have head problems and is out of it.

The film is beautiful with cinematography and lighting. The scenes where they fly in the hot air balloon in the clouds contains lots of breathtaking imagery. I saw this in 70 MM projection at the Music Box, and since the whole screen was filled up with the movie, it was spectacular. I heard this film may be in IMAX at some point and given that the IMAX screen is much bigger, viewers would feel like they are thousands of feet in the air just like Glaisher and Wren.

I am giving The Aeronauts four stars. I walked in not sure how amazing this movie would be, but it exceeded my expectations.  It is one of the top films of the year for me. Also, best performances once again by Redmayne and Jones. Viewers will want to see this in 70 MM projection which is possible in Chicago in December. True film fanatics will not be disappointed as they will experience a ride like no other without technology.