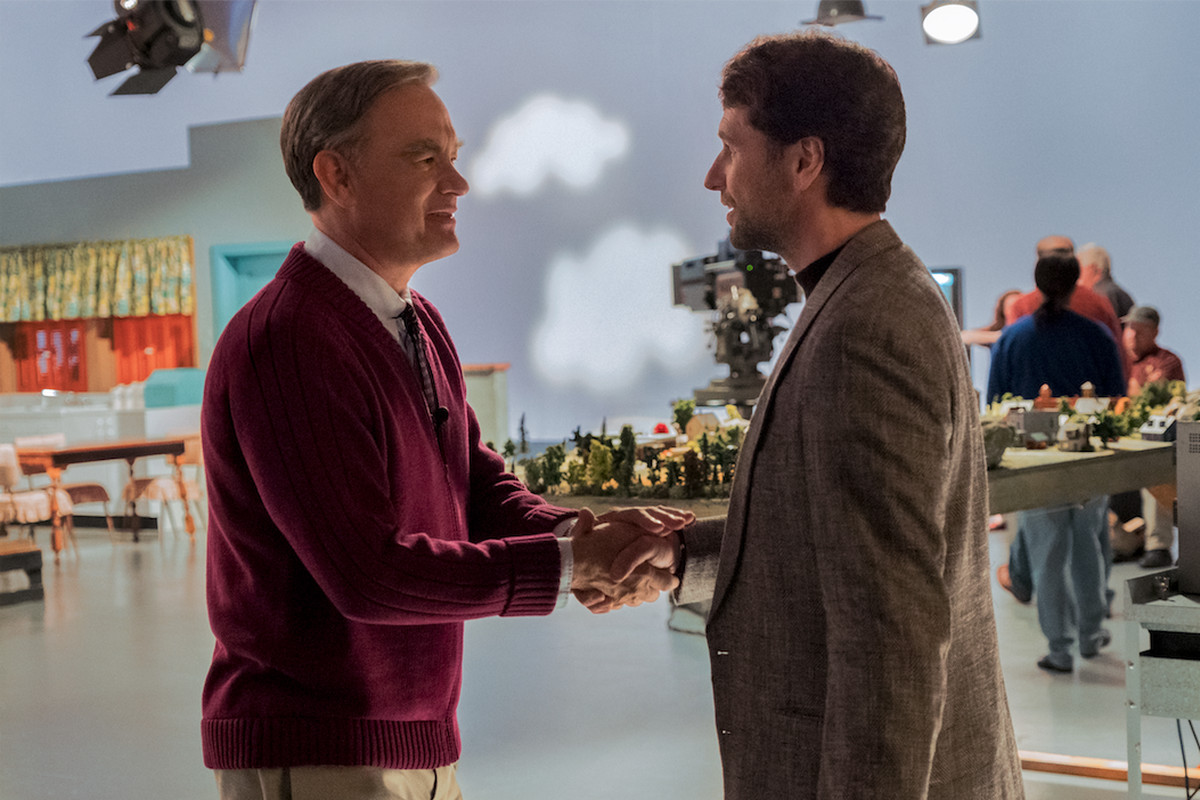 Given that fascination with Fred Rogers has been growing in the past year, A Beautiful Day in The Neighborhood is a charming, delightful, and uplifting film.  It focuses on how Mister Roger’s goal was to help people find the bright side of elements in their lives. Fred Rogers is the perfect role for Tom Hanks who turns out to also be distant cousins.  Viewers will pick-up on this connection because Hanks portrays the role so accurately. The film may seem mellow but is moving. The carefully paced drama and biographical film enthralled me with both the story and the performances. Not only was Hanks performance noteworthy, but also Matthew Rhys, who plays Lloyd Vogel is excellent.  Vogel is the character that Mister Rogers wants to help feel better because of the life challenges he struggles to overcome.

The film centers on Mister Rogers in the beginning, however, the unique factor is Vogel turns out to be the primary focus of the film. Vogel is a journalist who gets assigned to shadow Mister Rogers in order to write a story. Vogel is initially against the idea of working with Mister Rogers because Rogers’ focus on kids. Vogel simply thinks he is above that. However, Vogel has several problems of his own which he cannot seem to move past. Vogel struggles to get along with his father Jerry Vogel (played by Chris Cooper) who was deceitful towards him at a young age and not very supportive of him for many years. Lloyds’s wife, Andrea Vogel (played by Susan Kelechi Watson), wishes he would give his dad another chance, but deep-down Lloyd’s emotions still bother him. Once Lloyd starts working on the story and getting to know Mister Rogers, Mister Rogers starts to realize that Lloyd is sad and is distracted. Of course, given Mister Rogers’ laid-back and extremely kind sense of humor, he wants to help Lloyd focus on the present and the positive. Once Lloyd and Mister Rogers start to work together, Lloyd starts to slowly regain his confidence in life and overcome some of his challenges.

This is one of my favorite films of the year.  I am someone who has struggled to put hard times in my life behind me and have come to realize that when I find positive role models, I have many positive qualities to offer the world. A Beautiful Day in the Neighborhood is a film that I relate to in times when I am disgusted or cannot seem to get past something.  The movie made me reflect on how Fred Rogers (in the movie and in real-life) gave people advice on how to help make the world to be a better place. The film is purely a joy and I did not find anything I disliked about it because it felt so real.  I truly felt like I was right there in the moments of connection between Rogers and Vogel especially in the scenes where Vogel starts to reconcile with the issues he has held onto for a long time. I found myself in tears because A Beautiful Day in The Neighborhood reminds me that we cannot hold onto the past.  And, even at times when I may feel like I am not accomplishing my goals, that I can keep trying. Fred Rogers offers both hope and inspiration.

A Beautiful Day in the Neighborhood deserves four stars. I walked in thinking it was going to be a made-for-Hollywood moneymaker film, but it is not. It is not cheesy nor does it try too hard. The film’s careful pacing shows viewers how Mister Rogers is helping Lloyd build his relationships and slowly regain his confidence. Eventually, there are positive doors that open. Audiences will see those amazing doors when they see A Beautiful Day in the Neighborhood.