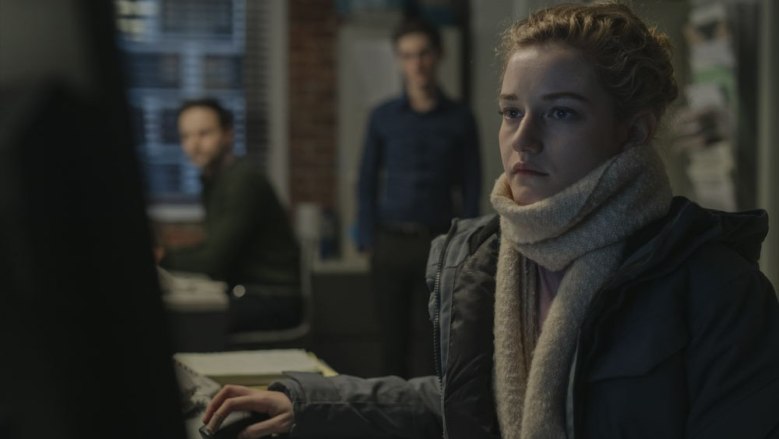 Director Kitty Green delivers an eerie psychological drama that is based on issues related to the prior problems of Harvey Weinstein. However, it is not focused on just the news stories being revealed, but instead the discreet communications, disturbing phone calls, unexplained schedule changes, and odd strategies that strike the main actress as red flag while doing her job. The Assistant lacks use of music and scoring by including a generous amount of silence which makes viewers feel like they are sharing the moments with Jane (played by Julia Garner) as she comes across critical realizations. The problem is that if she complains, she feels she is bound to lose a position that is top-notch. She tries to avoid a disturbance, but the more the weird conflicts arise in emails, phone calls, or meetings, her anxiety slowly grows.

Jane is an assistant to a prestigious executive in a film office. She handles most of the day-to-day responsibilities that require her to work long hours. While she has adapted to her work routine, over time she starts to become more aware that her position is shady based on the tasks she is told to do by her boss. For example, Jane comes across phone calls with his wife who is angry with him (that is a red flag), she gets many notifications of cancellations with other executives (that is another red flag), and she is told to write many emails in a way that does not make sense to her. This starts to make Jane realize that her boss is being intentionally discreet when she is told to continue the process of what she is doing even though it does not look professional or appropriate. As more aggravations come across her desk each day due to how her boss wants processes done, the more she realizes that there are unacceptable elements that she feels she needs to try to figure out.

I felt that Julia Garner was the perfect type for the role of playing the assistant, Jane. She is professional, not popular, comes to work and stays on task. She also keeps it cool without showing the uncomfortable anxiety she has building up. Garner also did an outstanding job expressing how she is feeling as time progresses.  I felt that she was what stole the movie. The film is decent, not great, but her acting is what drives the film’s main problem.

The Assistant is dry in moments. That is because it’s simply set in the same place throughout the movie and it tries to stay on pace with the setting of a film office (with the strange operations hidden). As Jane discovers more weird problems to take care of or get rid of for her boss, we wonder what her next plan is. It will make viewers ask themselves if she going to do anything.   This question is one that kind of drags on, but in the end the film is truly a haunting thriller based on Jane’s discoveries. I give The Assistant two and a half stars.

One thought on “The Assistant Review”