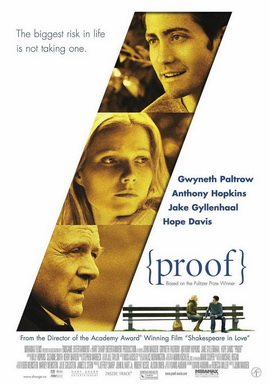 While still in quarantine, I decided to watch the 2005 film directed by John Madden, Proof. I was set to see the play, but due to the COVID-19 was cancelled so I decided to watch the movie instead. The film is based on the play written by David Auburn and takes place in Chicago. I felt that watching a movie where Chicago is the main location would help me to feel more hopeful about returning to the city soon. The subject of Proof is challenging and enthralling. The film gears on scenarios related to mathematics and grief. Those two subjects cause tension to set in which reveals the film’s conflict. The questions that the main characters have do not seem correct or inaccurate based on the realizations they come across after the death of a father and genius math professor.

The main character is Catherine (played by Gwyneth Paltrow), and there was a point where she was driven and disciplined for academic success. This was all because her father, Robert (played by Anthony Hopkins), always pushed her to go beyond boundaries in terms of mathematical subjects and equations. He is a well-known and beloved professor of Mathematics at the University of Chicago. Catherine’s life hits a plateau when her father becomes sick and she withdraws from school to take care of him. She has plans to return to a prestigious school, but her motivation for success is paused after the death of her father. There are moments when they are in discussions (shown as flashbacks from when he was alive) about various subjects and other times when they are simply socializing. Catherine thinks back to those moments wishing she would have made better decisions before his death.

After his death, one of Robert’s former students, Hal (played by Jake Gyllenhaal) comes into Catherine’s life. Hal brings to her attention mathematical equations, proofs and theories which are genius and could lead to future brilliant publications. Catherine is hesitant about this at first, but then she discovers in one her father’s many notebooks of equations that she possesses similar or identical patterns to his writing and his thinking. This makes her realize she could have inherited the incredible mind of her father and she can choose whether to use it for her own success. The motivation for her is mixed because one side of her is motivated by her estranged sister, Claire (played by Hope Davis), to start a new life in New York. However, the other side of her may want to continue to do mathematics and figure out if she can solve life-changing theories like her father was able to. Catherine’s mind is blank with what to do because she feels that continuing to seek achievement through the eyes of her father will only make her feel more depressed, but she also feels she has already let him down so there can still be hope. Hal is the one who tries to encourage her to continue what her father started with the mathematical theories he had not completed.

I find Proof, the film, to be encouraging because it illustrates how one can live life for the better once a tragic scenario has happened. I felt that Catherine’s character had the opportunity to do better for herself if she continued life in the eyes of her father whose talent she inherited. The film’s moments of jumping back and forth from the past when her father was alive to the present time, gives viewers an idea of which scenarios play into her not being able to make a decision that seems right to her. The message is to not give up what one enjoys doing. Catherine is devoted to her mathematical skills and she does want to carry on the legacy of her father’s brilliance. Hal wants her to as well.

With Proof there may be theories that are revolutionary. Catherine may be able to solve them with the help of Hal, but with her father having passed, the motivation is a challenge. The film’s emotions are honest, faithful, and gripping. I found that there are moments of both satisfaction and dissatisfaction. Overall, the movie reminds viewers that life can be challenging and there is nothing wrong with struggling and wanting to get better. Catherine can get better if she puts her mind to it. I give Proof four stars.