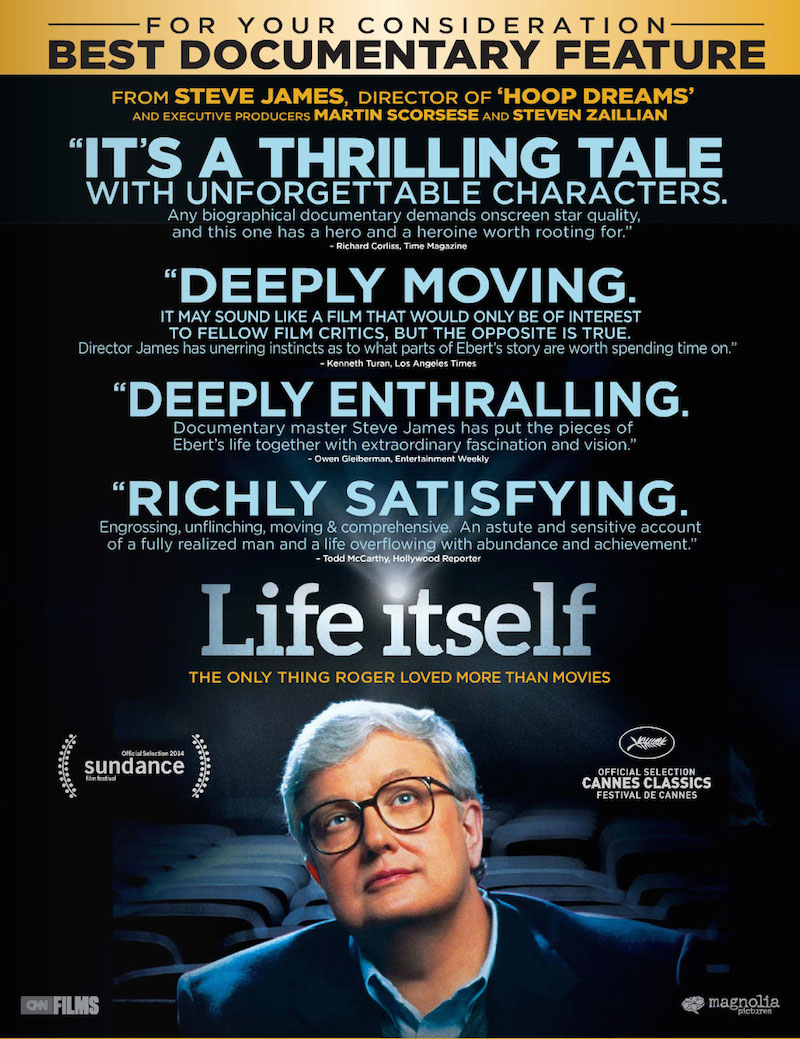 A few days ago, I joined a Zoom meeting focused on the documentary film, Life Itself. This film speaks to me because Roger Ebert is my idol as he first inspired me to write movie reviews. I even attended the Roger Ebert Film Festival in 2015.  During this recent program, there was a discussion and a Q and A with the director of the film, Steve James, and Ebert’s wife, Chaz. The discussion was one of the most thought-provoking and in-depth virtual discussions I have watched during this whole pandemic. After the Q and A, I watched the film again (after almost four years of waiting to watch it a second time). In the Q and A, I asked what Roger’s favorite film locations were in Chicago, and the response from Chaz was Music Box Theatre, but that Roger also had many favorite movie palace locations in other states. Her comments spoke to me the most and left me wondering how Roger would have lived during this pandemic especially given his health issues.

The plot of Life Itself goes way back to the start of Roger’s career and what led him to be the most beloved movie critic around the world. The film starts by showing his routines, and jumps back and forth (in a structured way) showing his love of films, his style of writing, his partner in crime, Gene Siskel, and how Roger continued to be a film critic pioneer even when disease limited him from speaking. I remember seeing this documentary the first chance I had on the big screen at Landmark Century Centre Cinema in downtown Chicago, and I walked out with tons of mixed emotions. I felt positive, yet sad, but also felt more encouraged. I will admit that this pandemic has had me experiencing ups and downs and feeling discouraged with cinemas not being open. But, watching Life Itself again, and attending the Zoom discussion with Chaz and Steve made me feel the same way I did when I first saw Life Itself, i.e. uplifted. The signature thumbs up and thumbs down logo by Roger has spoken to me since I was a kid and to this day it still does.

As I watched Life Itself again after the Q and A, it really made me wonder what Roger would have gotten out of this pandemic. I believe he would have written with passion, discipline, and honesty about how the films that are now streaming, instead of in theatres, made him feel. Many of us are frustrated with being cooped up in our homes, but Roger was already cooped up with his disease. However, he kept his inspiration alive, and even though he lost his ability to talk, his writing was like hearing him talk based on the writing style he would use to write his reviews. That is why I admired Roger and still do. He never wanted to give up on his followers and I don’t want to either as I continue with writing my film reviews.

If Roger was still here, I believe he’d be inspiring many of us now. He would be inspiring us to use the technology to find our voice. He once said, “Your intellect may be confused, but your emotions will never lie to you.” I have felt that way during this pandemic, but I am sure many cinema enthusiasts have felt this way about their intellect as well. I still carry Roger’s words and encouragement with me to progress on to a more productive life (even in the worst of times).

Life Itself is a documentary that I will always cherish.  It reminded me again of how Roger got to where he was as a film critic and what to consider in the film industry. The film will make viewers laugh and cry, but in the end emerge feeling more positive. Roger has always spoken to me. While I remember many times I may have disagreed with his review, but by sharing his emotions about the movies, he motivated me to grow to write my own reviews better. Four stars for Life Itself.

One thought on “Life Itself Q and A Review”