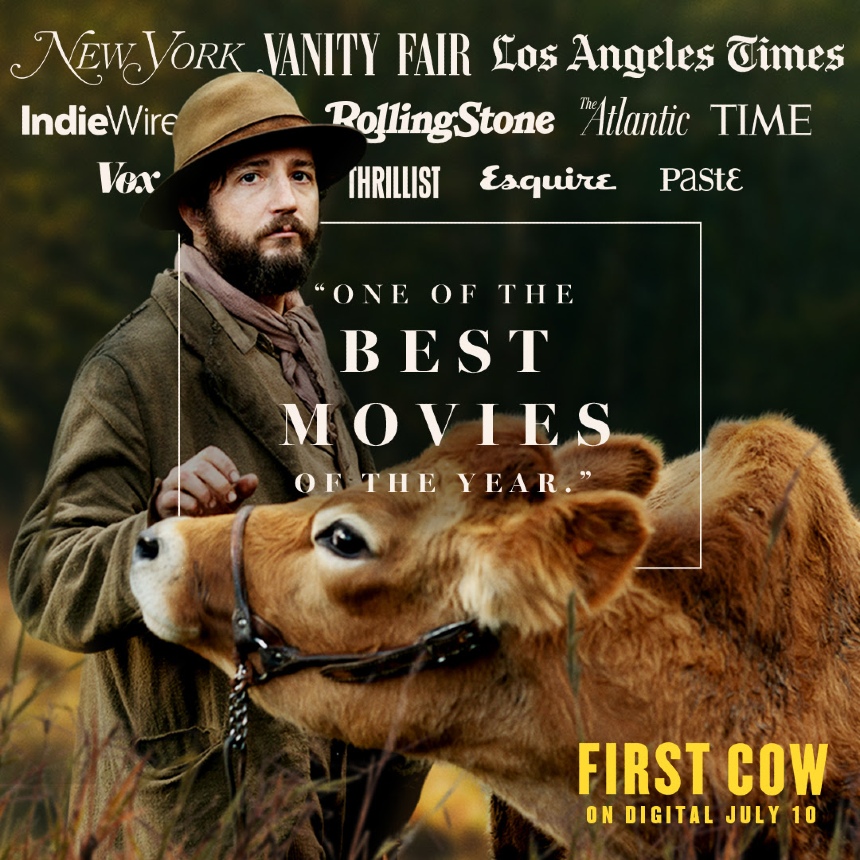 Audiences may perceive that First Cow is going to be a quiet and dull experience based on how mellow it is in the beginning. However, it is a brilliant film due to the screenplay and cinematography, and that is why First Cow deeply captivated me.  The director, Kelly Reichardt, had an interest in photography since childhood, and her fascination was fueled by having a father who did photography for crime scenes. Reichardt’s experience in photography has led her to make films with vast scenery, and First Cow’s scenery is magnificent. The photography in the forests and the mountains left me visually dazzled.

The plot of First Cow takes place in the 1820s in a forested territory in Oregon. The film introduces us to Cookie (played by John Magaro) who is a loner and a cook. He is seeking to find someone to start a business with involving food and cooking in a timeframe of no technological advancement. As he navigates his travels, he joins fur trappers. The fur trappers do not express much interest in his cooking or creating food for business. That is until he meets a Chinese Immigrant, King-Lu (played by Orion Lee). Cookie’s wishes come true when he finds assistance in King-Lu who has an affiliated past as an entrepreneur. With King-Lu’s strong sense of the hard work needed to establish a successful business, the two team up to build a business milking cows.  Together they find business connections in the uncharted territory of Portland, Oregon, and First Cow turns into an astounding and inviting journey that will touch many.

The film’s focus on milking cows looks so accurate in terms of how the process of making foods would have been back in the day. The cinematography that is used the film is realistic, where viewers will feel taken back to a time when there weren’t any forms of technological advancement for business.  No phones, no computers, no networking tools, and everything had to be done on foot and through in-person networking. The film’s sense of urgency to succeed in business is amplified through dialogue demonstrating trial and error which will make viewers appreciate the past. The main characters do not get distracted, but are always on foot trying to find what is right, and they can only do that via face-to-face interactions.

The business side of this movie spoke to me. I felt that the roaming of uncharted territories showed how being a landowner and having the option to share or not, was what truly made businessmen or landowners have power. Cookie and King-Lu have some power, but they are not confrontational or egotistical. They are restrained and patient, because given that they have limited resources, confrontation is the last problem they want to have. I found that is what also drove the film to be inspiring, because although they are striving for success, they do not want to hit plateaus. First Cow is about two men trying to develop a new idea for everyone, but with spiritual meaning.

Based on the spiritual value, deep connections, and cinematography, I give First Cow four stars. To watch this film during the hard time the world is going through now, made me appreciate life more. It made me realize that I need to be more thankful for the resources the planet gives us to create and rejuvenate. Today, we continue to use so many products from milking cows, and it is still a growing business. First Cow is a faithful film to how that era started.

One thought on “First Cow Review”