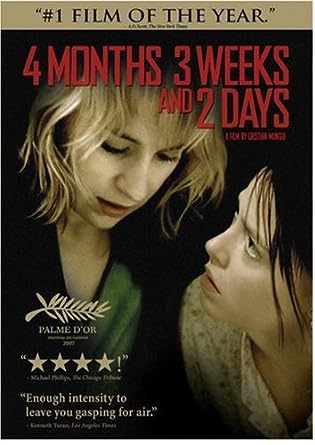 The plot focuses on college roommates, Gabita (played by Laura Vasliu) and Otilia (played by Anamaria Marinca). Gabita is close to five months pregnant and Otilia is the one that helps her set up an illegal abortion. Since the movie is set in 1987, the technology to make advanced arrangements is not available which makes the process of getting this illegal task completed especially complex for Gabita and Otilia. They hire a man named Bebe (played by Vlad Ivanov) and who is an abortionist. However, he has a sinister side that makes the illegal situation more tense and uncomfortable for the two roommates. Given all three of them are involved in an illegal activity in Romania, they are all at risk for legal troubles. Bebe wants to ensure that the arrangements are perfect, but since Gabita and Otilia are still being in college, the procedure is more risky and expensive than what they had expected.

The plot involving abortion is what makes 4 Months, 3 Weeks, and 2 Days an emotional rollercoaster ride of tension. The title hints at this as well because it alludes to the time frame of the pregnancy. It is an excellent film, but also sad.  If, during the procedure something goes awry or an ambulance is called, the characters risk going to jail. The anxiety that builds worrying if things might get out of hand makes 4 Months, 3 Weeks, and 2 Days emotionally enticing.

Overall, I enjoyed this movie, but I will only watch it once. The concept is depressing, but the film is faithful to what people would have to do in this situation and the mental anguish those choices would create.  However, it also makes people think about alternative options or safe resources they could turn to. Fortunately, many things have changed for the better since 1987 including technology and abortion laws.  I give this movie three stars.