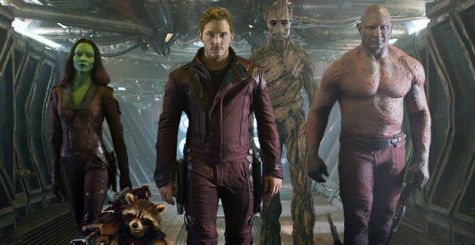 The plot: In the different locations of space, an American pilot under the name of Peter Quill, realizes he is in the object of a manhunt after his immature judgment of stealing an orb.

“Guardians of the Galaxy,” assembles all of the members of this Marvel team: Peter Quill (known as Starlord), Gamora, Drax, Groot, and Rocket. This team is like aggravated detectives, or a punishment on each others’ behavior. What really caught my attention is how they all fight differently. Peter Quill (Chris Pratt) is a laid-back man that loves his music and is skilled with weaponry. Gamora (Zoe Saldana) is a green lady that is skilled with martial arts. Drax (Dave Bautista) is a grumpy and muscular purple man that does not put up with people’s garbage. Groot (Vin Diesel) is a human tree that can grow in a variety of ways and only knows how to say, “I am Groot.” Then there is Rocket (Bradley Cooper), a ruthless, gun-slinging Raccoon with a bad attitude.

This is one film that is similar to many Marvel films, but it leaves us laughing, rather than being curious about the next serious marvel film. There is a finale with much action. However its resolution is quirky moments of something joyful.

Marvel fans will really have fun with this movie. If many have read the comic books (which I am sure they have), this is a Marvel film where they will be laughing more than they expect to be. “Guardians of the Galaxy” is done well by James Gunn, with comedy and action. It provides its fans with the style of Marvel adaptations that they love.

Three and  a half stars.