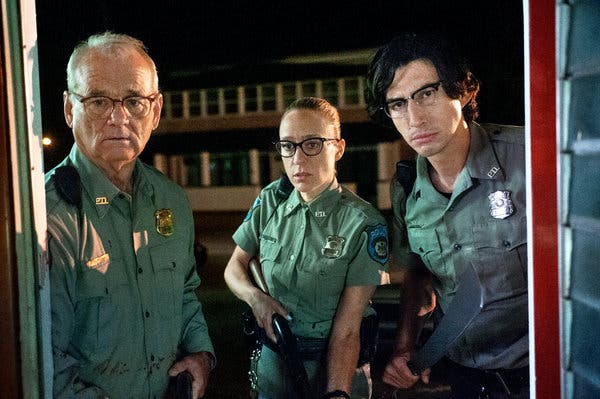 From director Jim Jarmusch, The Dead Don’t Die is a film that contains many of Jarmusch’s filming elements including moments of silence, places of solitude, and people who are wrapped up in aggravation. The Dead Don’t Die is a clever, witty, and creative dark comedy that features characters who are trying to get by with the zombie apocalypse around them. Now, the movie is not like those zombie movies with tons of shootings like Dawn of the Dead (2004), Zombieland (2004), or Land of the Dead (2005). The film is Jarmusch’s Paterson (2016) just with some zombies thrown into the mix of the main conflict. In fact, the characters act like the zombies roaming the places where they live is normal. The lack of suspenseful music and the quiet tone makes the movie unique in the zombie genre in which most zombie movie fans expect violence and suspense related to a struggle to survive.

The Dead Don’t Die features Cliff Robertson and Ronnie Peterson (played by Bill Murray and Adam Driver) who portray police officers in a fictional town called Centerville. They are both quiet and are bored with being police officers. That is until they come to realize that some zombies are in town, and that they can pose danger to those that live around Centerville. However, everyone views the zombies to just be an annoyance which disturbs their peace. We are introduced to Farmer Miller (played by Steve Buscemi) and he is someone who is negative and impatient. Later, Hank Thompson (played by Danny Glover) comes into play and he is someone that is just a local. Finally, there is Zelda Winston (played by Tilda Swinton) and she views herself as a sensei and has a samurai sword. Each character that Jarmusch has chosen to be in The Dead Don’t Die has a rather strange hobby or habit that is incorporated throughout the movie. The pro side to the strange hobbies or habits is that they can hopefully keep them safe in the zombie war ahead of them.

Now, I have read many reviews and some have said this movie is boring.   Well, it may be for some, but if people know Jarmusch, they would understand why he made the film the way it is. He is not a man about blockbuster hits, he is someone that is big into the independent movie scene. The Dead Don’t Die it is probably one of the first zombie movies to be this mellow. I found the mellow moments in the movie to be an element which can help viewers understand the types of attitudes the main characters portray outside the zombie apocalypse. Some are just normal people with a solid life, and some have odd hobbies. The funny part about all of that is they are not concerned that their world is reaching the end when it comes to zombies. That is how most zombie movies are although over the years different directors have tackled a variety of different plots with zombie films.

I figured that The Dead Don’t Die would not appeal to everyone and that people are probably going to have mixed opinions about this zombie movie. I enjoyed it and am glad that it was not a film trying to be the Dawn of the Dead films or anything like that. It is a film in its own setting, but with zombies being treated like they are regulars or pedestrians, and the way to avoid them is either by killing them or ignoring them. Jarmusch went from directing a film about a bus driver who writes poetry and transitioned his artistic filmmaking in a similar quiet style to a movie with some zombies thrown in.  I give The Dead Don’t Die three and a half stars, because it is both creative and unique instead of being overly violent and filled with offensive language like most zombie movies.